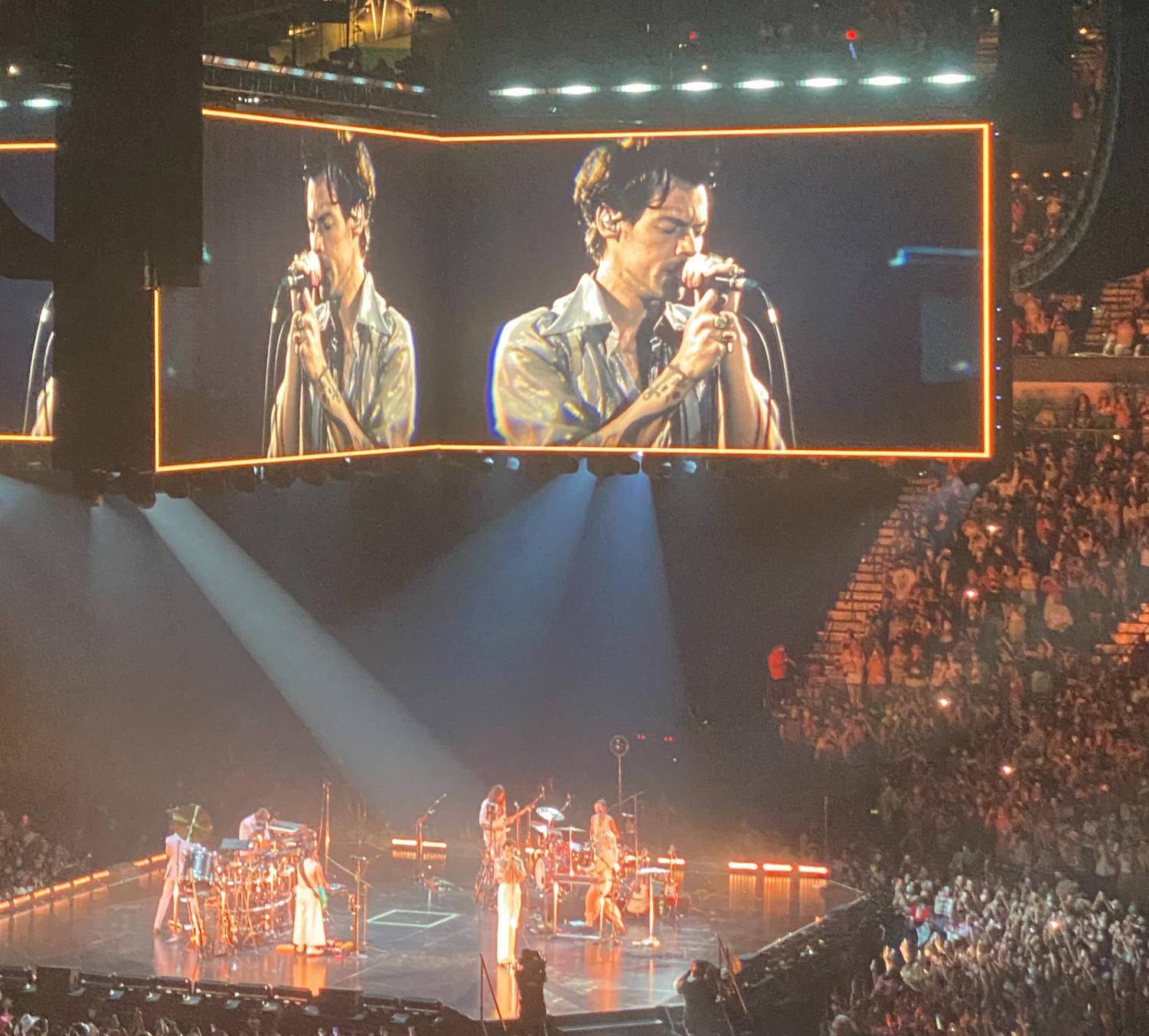 Harry Styles performs “Golden” at the start of his Sept. 9 concert in San Antonio.

Back to concerts after COVID

I go to many concerts, and 2020 was supposed to be no different. I bought concert tickets to a few performers that year, with them all being postponed. One of my favorite activities had been stripped away.

I love live music. I’ve been going to concerts since before I can remember. My first ever concert was One Direction in 2012.

For the next eight years, you could count on me attending 2-3 concerts annually. In recent years,  concert tickets have been on the top of my Christmas list. In late 2019, I got tickets to Harry Styles and Justin Bieber, but plans would soon change.

A year after he was supposed to perform, I finally got to see Harry Styles two weeks ago in San Antonio. Things were different, with COVID procedures being in place, but nonetheless, concerts were back. There is nothing quite like live music, and I was so glad to be able to go.

Other concerts had been canceled, so I was grateful that the performers I anticipated seeing were only postponed. Justin Bieber was initially postponed to 2021, but now he is set to perform in March 2022.

I’m not an avid Bieber fan, but I bought the tickets for my friend and I’ll take any opportunity to see live music. I just need to start learning most of his songs.

A couple days later, I saw Pitbull. Unlike Styles’ concert, this was one of those last-minute splurges. I had no idea he was even touring, but I saw he was coming to Dallas and just decided it would be fun to go.

Harry’s concert was way better, but I’m also a much bigger fan of Styles’ music. One of my favorite moments from the show was when he played “Kiwi.” He’s held a long tradition of playing this song at the very end when the energy needs to be heightened. This song is extremely fun to listen to live, and I’m super glad I got to experience it.

But I still had a good time watching Pitbull perform. It was really energetic and loud. I had seats really close to the stage and that made it feel more in the moment.

There are still many concerns with COVID because of the recent delta variant outbreak, but thankfully both venues I attended kept COVID procedures in place. In both concerts, a vaccine card or proof of a negative test was required. However, only masks were required at Styles’ show.

Live music is special to many people, including myself. It allows us to see our favorite performers and socialize with people who have similar interests.

Concerts are back, and I’m extremely excited to get back to my favorite activity.