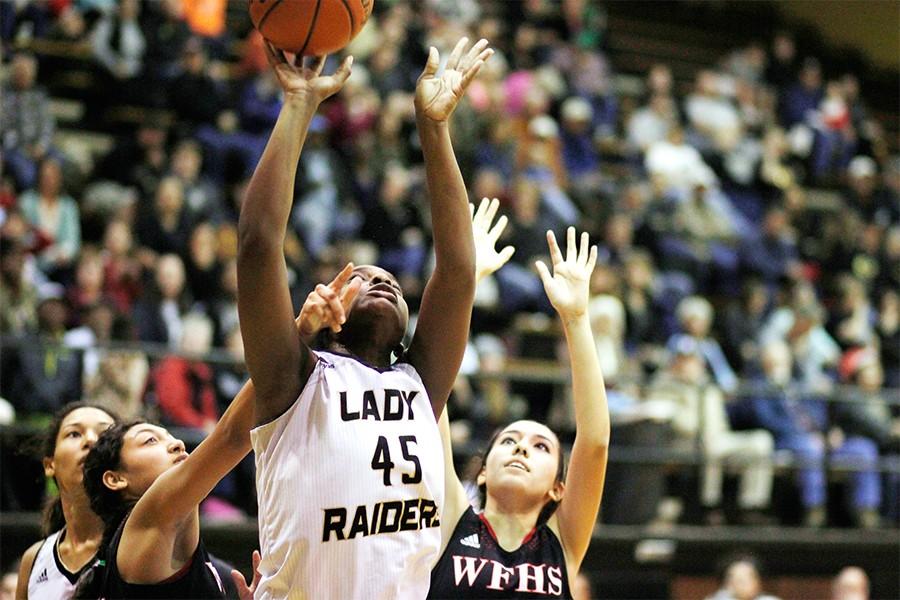 Senior Abreanna Harrison shoots the ball. “I love my teammates and wish them the best of luck in their journey,” Harrison said.

A knock on the door stops the laughter erupting from the hotel room. After hearing coach, they immediately stop everything and leap to their beds, pretending to be asleep. Awake past curfew, the girls laugh again after getting caught, eventually dozing off with the thought of tomorrow’s game on their mind.

With the girls basketball season coming to a close, the seniors are having a tough time saying goodbye to their teammates and the school.

This season was the best thing I’ve ever experienced. I’m blessed to have supportive teammates.”

“It’s sad knowing that this is my last year playing basketball, I feel like I shouldn’t have taken time and my teammates for granted,” senior Corbri Wingfield said. “I will definitely miss my teammates because most of us have been playing together since the seventh grade. Since we’ve been playing for so long, we’ve grown really close, and I don’t think I’ll find anyone else like them.”

Senior Mercedes Leija said she thinks it’ll be difficult adjusting to not being able to look forward to playing another high school game.

“It feels different knowing I won’t be playing at Rider anymore.” Leija said. “I feel like teammates are all different and that chemistry we had won’t be the same as with another team. I’m going to have to get used to playing with other people and it won’t be the same.”

With the girls being so close on the court as well as off, Wingfield thinks the girls’ friendship will continue after college.

“I really love my teammates,”  senior Madison Mays said. “I hope the chemistry we have will stay after we graduate but you never know what’s going to happen after high school.  I will try to keep in touch and catch some of their games.”

With the experience gained from the four years playing with her teammates, Wingfield said she definitely had to learn to be thoughtful of the team as a whole in order to have the chemistry they’ve had.

It’ll be weird not playing with my teammates, but I’ll definitely try to catch their college games.”

“I think I’ve become more disciplined from the team,” Wingfield said. “Before I had a really bad attitude, and being with the team has made it a lot better. I realized everything wasn’t all about me and that I need to put my problems aside for the sake of the team.”

Although the seniors are moving on to college, Mays said she’ll never find better teammates than the ones she’s been able to play with for so long.

“If you don’t know how to do something they don’t yell or get frustrated, they help you,” Mays said. “They’re always there for you even when we’re out of basketball. If you need someone to be there for you, they’re there.”