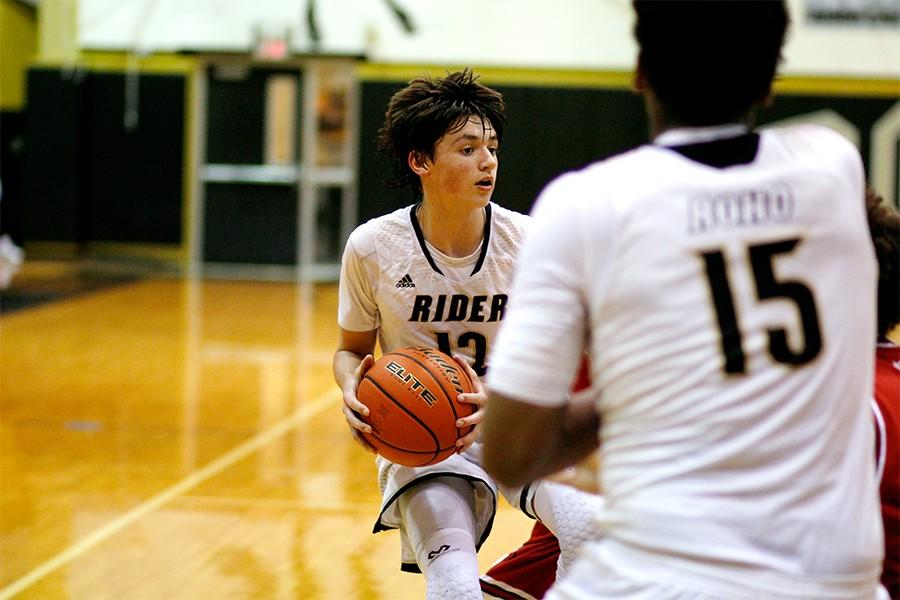 As the only freshman on the team, Ty Caswell scored the winning points in the Rider/Old High game in double overtime. “It felt really great because that was such a big game,” Caswell said. “They are our biggest rivals and it was incredible to win it for us.”

‘More Than A One Man Show’

Older players pass on knowledge to teammates throughout successful season

They had gone into overtime twice and just needed 2 more points to beat Old High. As the only freshman on varsity, Ty Caswell said the pressure was on.

“I was nervous since it was my first Rider/Old High game, but once it started, I got in a rhythm,” he said. “I tried to do the same thing I always do. I was out there playing just like a normal game.”

Following the down-to-the-second 65-64 win, head athletic coordinator Marc Bindel tweeted “That said, how about the heart of @ROHObasketball. We are more than a one man show. ROHO magic in full effect tonight! #OFOT”

With the current *7-3 district record and advancement to playoffs, the “tough start” to the season shook the team’s confidence, junior Conner Chamberlain said.

“We started off the year not really knowing how the season was going to go because we had two tough losses against Chisholm Trail and Denton, but I had faith in our team,” Chamberlain said. “We’ve been going pretty well lately and it’s been a big confidence booster for the whole team. We all feel we can get really far in playoffs with how we are playing now.”

Along with the practices that strengthen their skills, Caswell said he is influenced by the older players on the team and the conversations they have strengthen him as a player.

“I’ve been playing basketball for a long time, but I really am just trying to learn as much as I can and take in every moment from the seniors,” Caswell said. “I want to take away what they’ve learned over their four years and use that going forward.”

With two district games left in the season and with playoffs in mind, senior TJ Vasher said the time left with Raider basketball is “bittersweet.”

“You do something for so long that you never want it to end, but I’ve realized that there are bigger and better things for me, and I have to move on from here,” Vasher said. “It makes me sad at times, but I’m also pretty grateful for the time I’ve had here.”

With four years on Varsity, Vasher said playing against older players was intimidating but, through the challenges he faced, he acquired experience that he wants to pass on to the rest of the team.

“With this being my last year with basketball, I’ve been trying to give the younger guys the knowledge I’ve gained over the last four years,” Vasher said. “I want to make it so they can have many successful years long after I’m gone.”