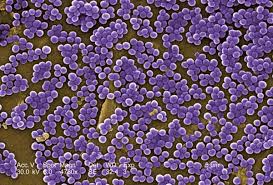 Staph Found In Locker Room, No Soap In Bathroom

A week after news broke about staph in the locker rooms, some school bathrooms were without soap for five days.

There have been three confirmed cases of staph out of the athletic department, causing the health department and the school district to take action and protect students and faculty.

“This is staph,” said school nurse Kim Hagy. “Nothing has been confirmed MRSA.”

MRSA is a more aggressive form of staph that is resistant to antibiotics making it difficult to treat.

“Students can contract it anywhere,” Hagy said. “Students need to wash their hands with soap and water frequently, especially before they eat. They should also keep open wounds covered and come to the nurses office so we can take a look at it.”

Action is being taken by the school and the district to protect students and attempt to eradicate the virus from the campus, but last week, many school bathrooms lacked soap and paper towels.

“We have done excessive cleaning,” principal Dee Palmore said. “We have bought these things called foggers. You pour a chemical into the machine and put it in the middle of the locker room and turn it on and it sprays this fog that goes everywhere and it gets on surfaces and it kills the staph.”

Fogging is currently being done in the locker rooms, where the staph infection has been found by the health department, once a week. Palmore said it really should be done twice a week.

“As far as we know it is only an issue in the athletic department,” Palmore said.

Sorry, there are no polls available at the moment.

There have been three confirmed cases of staph at the school, all have come from the athletic department. More specifically, the football team.

“It has been three football players,” Palmore said. “Staph is everywhere but it is in smaller quantities. When it is more prevalent, then you have a better chance of getting staph if you have a cut.”

Palmore, as well as senior Rachel Ritchie said that athletes are being told how to protect themselves.

“We always have to wear shoes,” Ritchie said. “There is often no toilet paper or soap in the locker room though.”

Last week, soap was missing from over half of the girls bathrooms in the school, and from two of the six boys bathrooms as well.

Ritchie said that the school is taking action to clean up the locker rooms.

“We had to take all of our stuff home so that they could use the foggers,” Ritchie said.

Parents have been notified of the issue, and Palmore feels that the district is addressing those concerns properly.

“Hopefully the parental concerns have been addressed through the cleaning and the foggers and everything that we have done so far,” Palmore said.

The health department was at the school last Monday again retesting for the virus, the school has not yet heard the results, which Palmore takes as a positive.