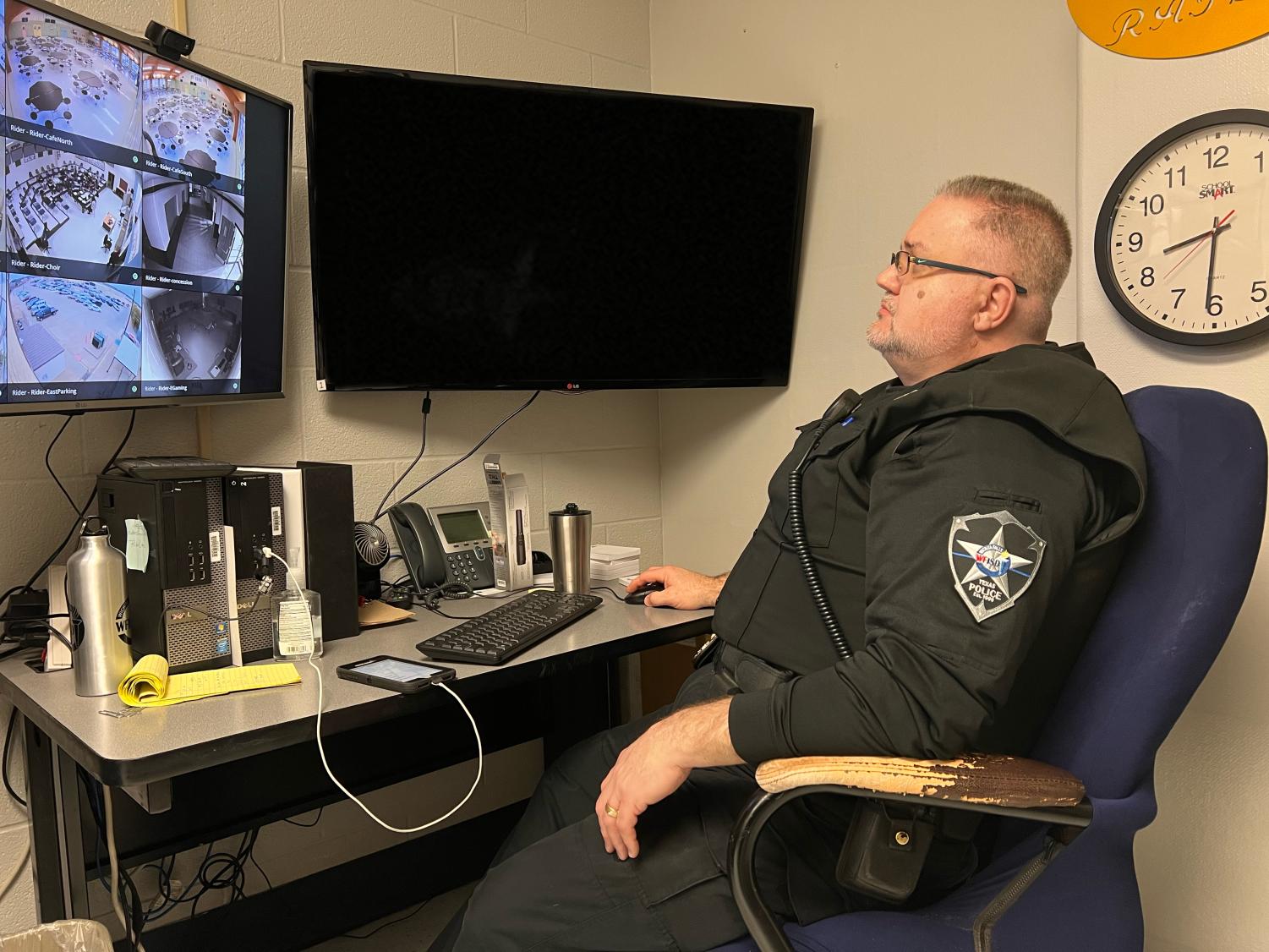 Officer Donny Johns has been on different police forces for more than 25 years. (Sandra Le)

Officer Donny Johns has been on different police forces for more than 25 years.

Johns’ journey back to high school

Donny Johns had only been on the job for a few days when he had to remember his old training. A bomb threat is not a typical task to face during the first week, but Johns was ready to spring into action.

“I had to resort back to my training that I hadn’t done in around 20 years,” Johns said. “It came back to me and it wasn’t too difficult to process other than the really hot weather. I knew what I needed to do.”

Even though he’s new to Rider, Johns has an extensive background as a police officer. He worked at the Wichita County Sheriff’s Department for 20 years, the Clay County Sheriff’s office for five years and the 97th district attorney’s office as an investigator for around eight months.

The transition from working at a more typical police setting to a school setting definitely impacted Johns, but he has taken these adjustments well and is enjoying his time here.

“It’s different in many ways, but I like it because I get to be more personal with people and I hopefully am able to make more of an impact on some of their lives,” he said. “Getting up early was definitely the hardest part. I’m not completely accustomed to the schedule and I get up a lot earlier than I used to.”

While Johns graduated from Wichita Falls High School, he enjoys the new atmosphere that Rider brings. He is excited to experience the new traditions and different history the school has. While the first semester had some interesting situations, he feels good about how he’s done so far.

“It has definitely been a learning experience, but I think it went really well,” Johns said. “I haven’t had any issues and I enjoy it.”

Getting put on the WFISD Police Department is no different than any other agency. Johns went through a background check, interview process and submitted a resume to show his experience to check his qualifications.

Since Johns has been in a typical police setting for most of his career, many would wonder why he decided to transition to a more student-oriented role.

“I liked the school environment,” he said. “It was interesting to me, and it’s a type of police work that I’m not accustomed to.”

While he may have started as the first WFISD officer at Rider, he is now not the only one. Every secondary campus in the district is assigned at least one officer, although the high schools each have two.

“Officer Jody Polvado started right before Christmas break and he is also assigned to Rider,” Johns said. “All campuses including Denver all have officers assigned to them.”

While the fall semester may have started off a little chaotic, Johns has been enjoying his time on campus.