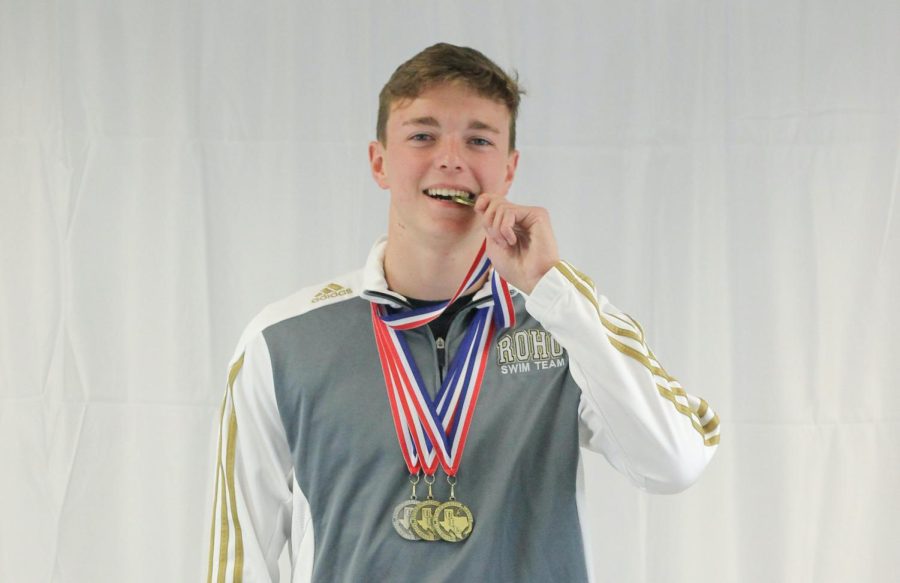 “Three, two one, Go,” the announcer said starting the race. Little did the racers know, they had a soon-to-be record breaker in their midst.

As soon as senior Andrew Wake lifted his head out of the water two weeks ago at the district meet, he looked at the results.

That’s when Wake knew he’d just written himself into the Rider swimming records.

“To be honest, I was just tired, but I also felt a sense of accomplishment,” Wake said. “At the same time, I wanted to do better and continue to progress.”

Wake’s next progression is a trip to next week’s Region I-5A swim meet and a chance at a state berth in the 50 and 100 freestyle. Those are the two events he broke longtime records at district.

Wake is new to Rider this year, but he started swimming competitively in seventh grade. His favorite race to swim is the 50-meter freestyle because he can “just get it over with.”

Wake has many strengths as a swimmer, one being the ability to push himself. He said his biggest weakness is nervousness and the stress of trying to do his best in each event.

Wake also is a loyal teammate. He helps the other members of the team work through any nerves they may have, and helps them train during preparation for meets.

“I am the only sophomore on an all-senior relay team so I’m always nervous when competing. Andrew makes sure I know what my worth is and that I deserve to be on the team,” teammate Eddie Stewart said. “He’s worked with me every day this past week trying to perfect my backstroke start. He’s taking time out of his valuable training time to help me, and that’s one of the most selfless things he can do.”

Swim coach Oyvind Zahl has seen Wake quickly make friends and become a great swimmer in the time he has been on the team.

“My first impression of Andrew was that he was a polite young man, a little modest,” Zahl said. “In the short time he has been on our swim team, he has made several friends and he has been supporting teammates by helping them work on techniques.”

Both Zahl and Wake have set goals for the regional swim meet, which was moved to Monday and Tuesday because of wintry weather. One goal is placing in the top two in each event Wake will be competing in. More record-breaking comes second in the preparation process.

In order to prepare his athletes, Zahl started tapering for the region meet (reducing the workload, but keeping the intensity). As the team gets closer to Monday’s races, they do less and less work at practice, and just fine-tune techniques and rest.

Wake has gone a very long way from being a new member of the WFISD swim team, and competing in his very first meet his second day to now holding two school records.

As he leaves Rider, Wake wants to swim for Brigham Young University in Provo, Utah, and plans to contact them after the swim season is over.