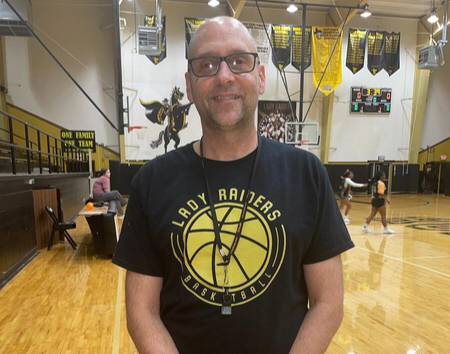 The Lady Raiders basketball season kicks off on Saturday against Hirschi with a new head coach.

As they get ready for the 2022-23 campaign, The Rider Chronicle spoke to Todd Chamberlain about his goals and expectations for this year.

Q: How do you feel about your team going into the new season?

A: We’re excited. We’ve got some really good returners coming back. We’ve got a lot of new faces, and I think everybody has worked really hard in the preseason to get ready for the upcoming long schedule that we have. We have a fairly tough schedule, but we’re really excited and I think we’re going to show a lot of people that we are ready to go.

Q: Since several starting players are gone from last year, what are your expectations for this season?

A: I feel like the returners, and I have two senior captains, are showing a lot of leadership to the youngsters. I have two freshmen on varsity. I have one player who moved in from another school. So, that mixture of returners and leadership, plus our new people. Everybody seems to be on board with each other, and they’re just excited to work together toward a goal.

Q: Who are the players you expect to play a key role?

A: McKenzie Lammers and Hannah Johnson are the two senior captains. I look to them for leadership on and off the court. Our returning players are Presley Caskey, Marissa Davila, Tay Parks and Kya Thomas Carroll. All returners with experience. Then we have Harley Henderson, who moved from Plano West, she’s definitely going to be able to help us. Sophia Curry is another returner. Then we have Addison Williams and Olivia Vanderburg, two freshmen that are going to play a key role. And then we also have Lily Fox, who last year moved in from Oklahoma, she’s going to be a post for us. So, again I expect everybody to contribute in some way, and I’m just hoping that we can find ways to have success and win games.

Q: As a first-year head coach, what have you done to make the program your own?

A: This is my first head coaching job in about 15 years, I was head coach a long time ago. When I first took the job at the end of last year, a couple things I decided to change was I wanted to get parents involved, get the booster club up and running, and get lots of parents involved in that. We renovated the locker room and put in a refrigerator and microwave and decorated it, so that the girls feel pride in their locker room. And we just wanted to make sure all the girls felt like they were important and included. And that’s on every team: freshmen, JV, varsity.

Q: What are your biggest obstacles this year?

A: A lack of overall experience playing together with all of the new faces trying to blend in, with a couple of freshmen that are getting their first experience on varsity. But, I feel like leadership in our seniors, and even the freshmen are mature for their age on and off the court. So, I feel like getting to learn to play with each other. Basically every group, that’s going to be the biggest obstacle. So far, it’s been really successful.

Q: What games and tournaments are you looking forward to?

A: The Fantasy of Lights here in town over Thanksgiving break, that’s here. Anytime we go on the road for a tournament. Like Abilene in the middle of November, then we go to Mesquite for a tournament at the very beginning of December. It’s always fun to get out of town and let the girls have time to bond together at the hotel, and get to know each other better and those are always good towards help building those relationships. Then, district starts in the middle of December, so it comes up pretty quick.

Q: How do you feel about being in a new district?

A: This district is going to be tough. We have some of the same teams from last year, but there are no teams in our district who are going to be easy for us to play. Everybody is going to be tough, have experience and have good programs and good coaches. So, there’s no nights off. We’re going to have to really play well with every district game, especially on the road. So we’ll see, but we’re definitely excited for the challenge.