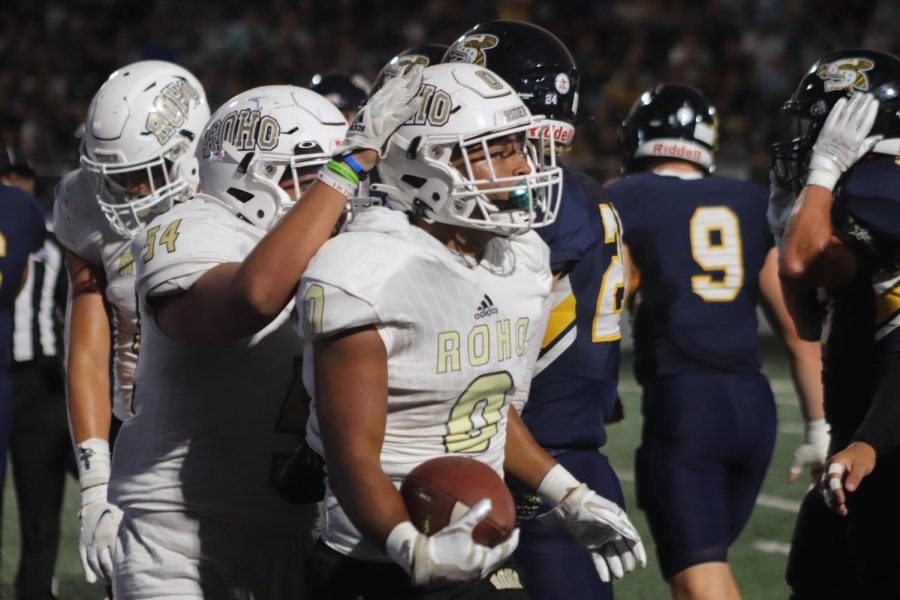 Jordon Gibbs (0) gets a slap on the helmet from offensive lineman Joseph Holst (54) during the game in Stephenville.

Not missing a beat

A team works together. Teammates help each other and lean on one another in times of struggle. That’s exactly what the Raiders did during the past few games of the non-district season.

Running backs Tyrone Morgan, Jordon Gibbs and defensive lineman Carson Ayres have stepped up in order to help the team after Anquan Willis and Luke Gambs were hurt in September.

Their contributions are a key reason the Raiders have had success heading into Friday’s district opener against Abilene Cooper.

“Losing them on the defensive line was a big struggle, but I feel like our team has stepped up and played for those guys,” Morgan said.

“I definitely play a lot more. Me and Anquan used to rotate, but now Anquan’s gone so it’s just me on offense,” Gibbs said.  “I’m a lot more tired because I’m not used to constantly getting the ball.”

Gambs and Willis are senior captains, so not having their leadership on the field forced others to step up.

“It really helps the young guys step out and get ready for next year when they won’t be here,” Ayres said. “It makes us get used to working together. Like Luke, he’s such a big leader and he’s usually the one who brings us together and without him, we found new leaders.”

Gibbs is enjoying a productive senior year with 480 rushing yards and four touchdowns, while Morgan has added 266 yards and three touchdowns as a junior.

“I think that these last games have just been building and learning,” Gibbs said. “Luke’s back now and Anquan will be back, so we should be doing great.”

Ayres has totaled 15 tackles and 11 quarterback pressures in his time on the field. Even with Gambs back, the junior will have a key role in the defensive line rotation.

All three players have enjoyed getting a chance to show off their talents.