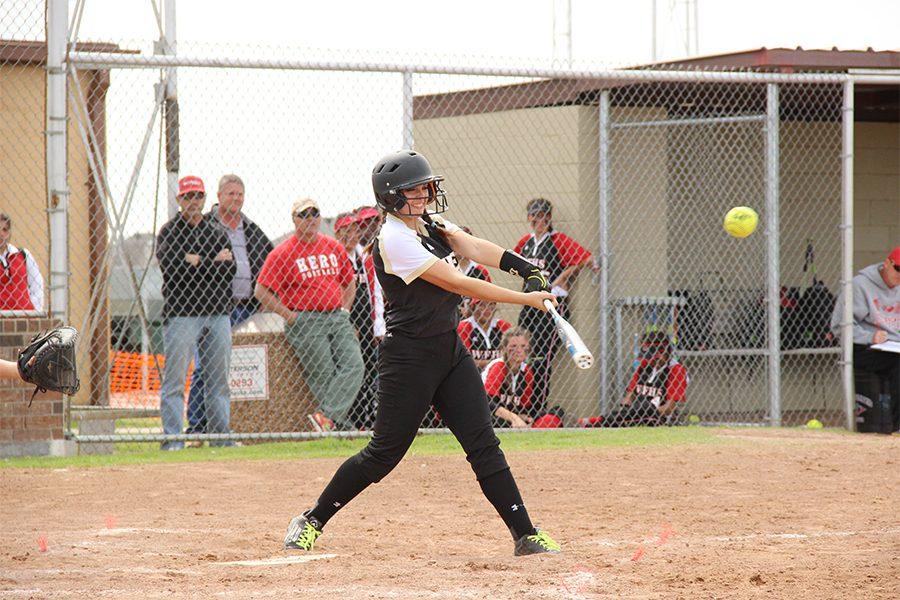 With a 19-1 victory, senior Megan Barmore hits a single against Old High.

In The Home Stretch

Players say goodbye, celebrate a bittersweet senior night at the last game of the season

“Y’all please laugh because this is going to be funny.”

Senior and softball manager Cortney Wood walked up to the pitcher’s mound readying herself to throw the first pitch of the game, the softball players cheering her on.

With nervousness taking over, she hesitated to throw, choosing to throw overhand so she wouldn’t embarrass herself, knowing she’d mess up if she threw underhand.

The weight of the ball grew heavy in her hand. She began to position herself, she took a deep breath, pulled back and threw.

Wood, softball manager for four years, was able to step onto the field as a player for the first time when sophomore Madeline Naylor came out after Wood’s senior night introduction with a “pitch”posal.

It was really sad saying goodbye to softball because it’s been a part of most of my life.”

“She had a little poster that said ‘Hey friend, would you do us the honor of throwing the first pitch?’” Wood said. “Whenever I walked away to turn the music on, all of the girls were in a huddle and told me not to go around them, and so I knew something was up. Before I walked up to the mound, I told them to laugh because I knew it was going to be bad, but I didn’t know anything about it.”

While Wood had no idea she was going to throw the first pitch at the last game, senior softball player MaClay Wilson said the whole team was in on it and wanted to make sure Wood knew she was a part of the team.

“This year has been the closest I’ve been with the girls,” Wood said. “I’m not officially on the team, but they make me feel like I am. This year I got really close to my senior girls and I just love everyone.”

Even though most of the girls have been playing together for a while, the seniors all said they’ve gotten closer this year because it’s their last year playing together.

I’m not officially on the team, but they make me feel like I am. This year I got really close to my senior girls and I just love everyone.”

“It was definitely bittersweet playing my last softball game because I’ve played the sport for so long and I’ve gotten so used to it and being with the girls and on the field,” Wilson said. “It’s good because I’m going onto bigger and better things but at the same time I don’t want to leave because it’s something I’ve been doing for so long.”

Senior softball player Allyssa Larson said she’s been playing since she could walk, so saying goodbye to the game was really hard.

“It was really sad saying goodbye to softball because it’s been a part of most of my life,” Larson said. “I know a lot of people who cried during the game.”

Since it was their last game, the underclassmen on varsity had to say their goodbye’s to the seniors.

“The underclassmen on varsity got all the seniors little gifts like candy and a picture of all the seniors with their signatures on it, it was really cute,” senior softball player Megan Barmore said. “My friend Ayanna cried the entire game and I thought that was really sweet.”

Because she’s been on the team for four years along with Wilson and Larson, Barmore said the girls have become sisters to her because of all they’ve been through together as a team and Larson agrees with her.

“The girls and the coaches have definitely made these four years memorable,” Larson said. “Softball has been one of the best parts of high school because I got to play with them.”