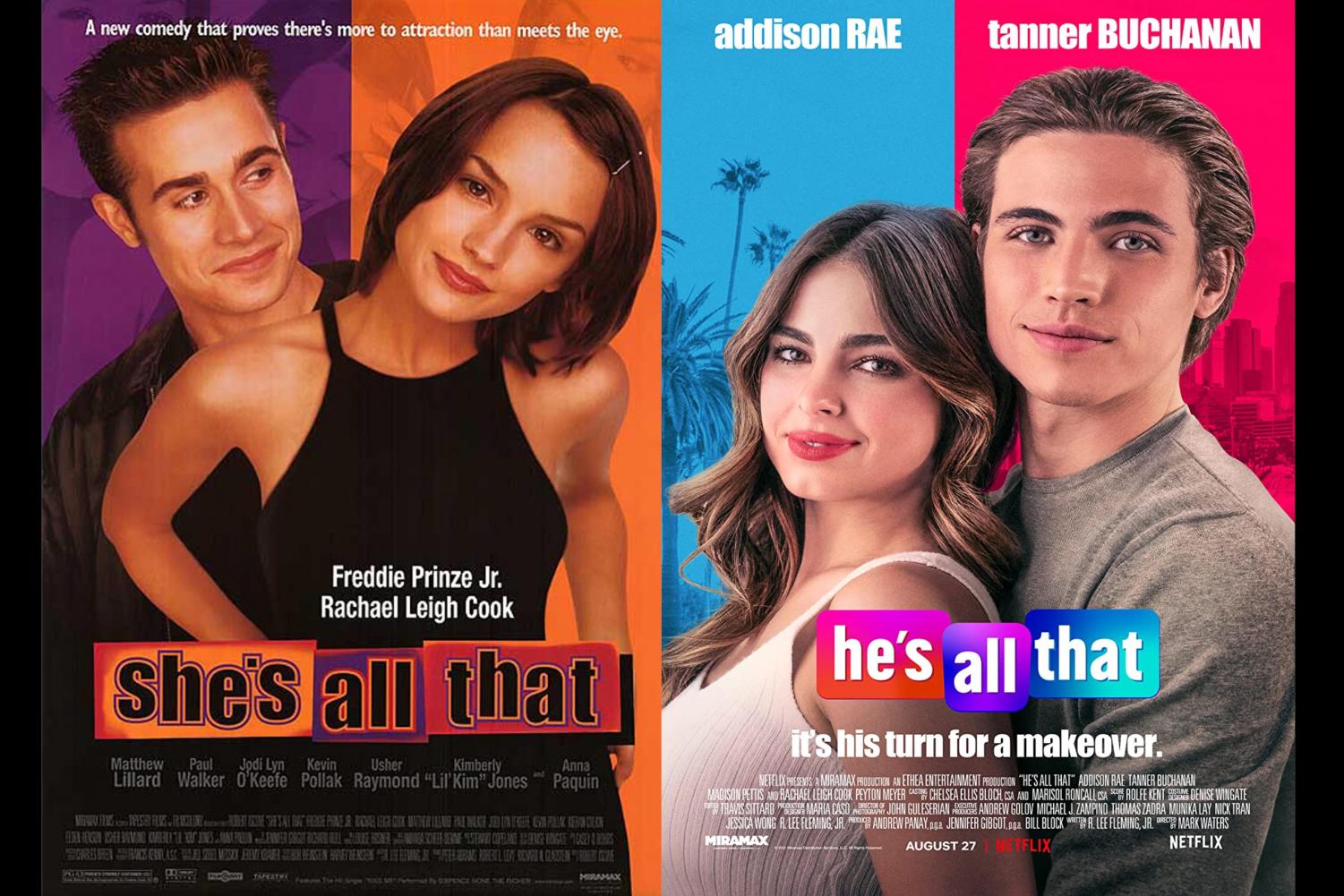 More than 20 years after the original “She’s all That” movie came out, Netflix has produced a “He’s All That.”

More than 20 years after the original “She’s all That” movie came out, Netflix has produced a “He’s All That.”

“He’s All That” can’t top the original

I had never seen or heard about the teen romantic comedies “She’s All That” or the Netflix remake “He’s All That.”

The first movie came out in 1999 and starred Freddie Prinze Jr. and Rachael Leigh Cook. It’s a typical ’90s movie that still entertains, despite everything being outdated.

Many are watching the recently made “He’s All That” because they’ve heard Addison Rae stars in it. But if you’re going to spend a couple of hours watching the TikTok influencer, you need to watch the original first because it sets the foundation for the storyline.

“She’s All That” starts out with the popular guy in school, Zack Siler (Freddie Prinze Jr.), getting dumped by popular girlfriend Taylor (Jodi Lyn O’Keefe) because she is now dating Brock Hudson (Matthew Lillard). Zack then makes a bet with his friend Dean (Paul Walker) that he can turn any girl into the prom queen.

Laney Boggs (Cook) was the chosen geek Zack had to make the queen in six weeks. Throughout the movie, the pair become friends, then Laney receives a makeover and goes to prom with Dean. Taylor and Zack are crowned prom queen and king, but Zack wanted Laney standing next to him. After prom he went to Laney’s house in hopes of winning her over.

“He’s All That” has the same kind of plot, but it is gender-swapped.

The movie starts out with the main character, Padgett Sawyer (Rae), getting cheated on by her popular boyfriend Jordan (Peyton Meyer). Padgett then makes a bet with her friend that she can turn any guy at her school into prom king with a makeover.

Cameron Kweller (Tanner Buchanan) was the chosen loser Padgett later becomes friends with. Padgett gives Cameron a makeover in hopes of him becoming more popular than her singer ex-boyfriend.

Padgett helps break Cameron out of his comfort zone and in return Cameron helps Padgett break away from her fame. Jordan and Padgett were announced prom king and queen, but Padgett does not accept her crown.

“He’s All That” has two memorable cameo actors. Matthew Lillard, who plays Brock Hudson in “She’s All That,” was the principal in “He’s All That.” In the remake, he announced the prom king and queen and danced like he did in the original.

Cook who plays Laney Boggs in “She’s All That” was Padgett Sawyer’s mother in the remake.

Both movies were cringey, but for completely different reasons. “He’s All That” has Addison Rae singing and performing multiple times — she should not have been. Also, I think Rae thought it was TikTok because they had a terrible dance off.

“She’s All That” fits the timeline of when it came out and probably would not seem cringey if I could have watched it during its prime.

No matter what, the first movie is always the best.

I like “She’s All That” more than “He’s All That” because it just fits better into every-day life scenarios, rather than a famous influencer in high school singing everywhere and having dance battles.