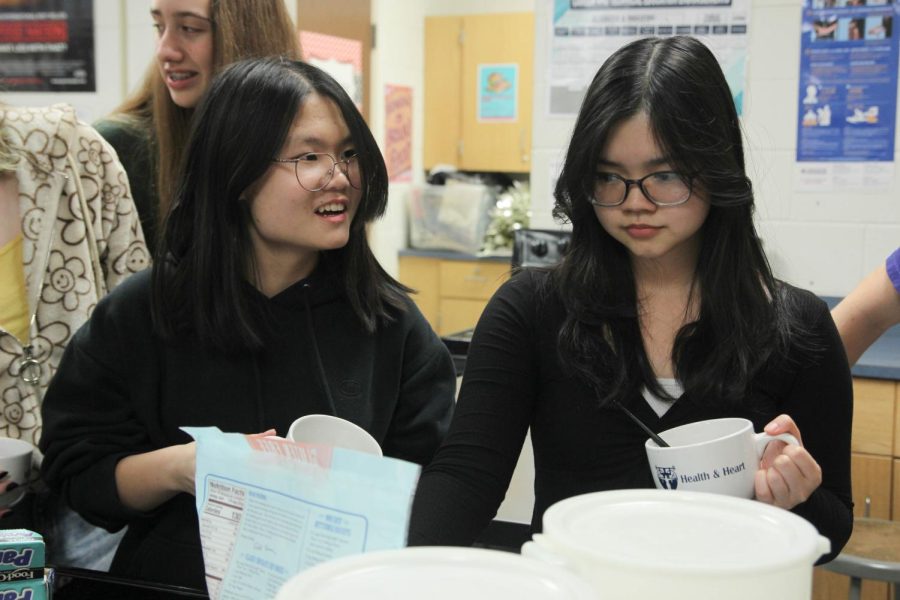 There are a lot of extracurricular activities at Rider. Most people are aware of theater, nerd club or the endless amount of sports and physical activities. This year, there’s even more to enjoy.

Rider is full of enriching, student-driven activities to keep the fun going even after school is already over. That includes Rider Reads, which, according to student leader Lenia Lange, has its origin in our sworn rivals.

“I have a lot of friends at Old High, and I heard that they had their own book club. Well at first, I was just going to go to Old High and be a part of their book club on the days they had meetings,” Lange said. “Instead I decided to start my own book club here.”

The club is still in its early stages, but Lange has an idea of when she’d like to get things done and how.

“Since it’s only two meetings in, it’s a little bit unstructured,” Lange said. “But I just let them go and trust that they’ll read. I let them do their own thing and read at their own pace. The books that we read should be done by three or four meetings.”

But why did Lange want to participate in a reading club so much? According to her, reading has always been a way to experience something that she couldn’t in her everyday life.

“Reading, to me, is everything. It gives me a way to get out of my own head, and to get into someone else’s,” She said. “I use it as a distraction mostly. I also use it as a way to relax and escape, and a way to do something that’s meaningful and challenges me.”

The club meets on every other Tuesday after school usually until 4 p.m. in room 104. They’ve started a romance novel, titled “It Starts With Us” by Colleen Hoover.

Guitar club was started recently after freshman approached guitar teacher Dwight Ham. According to Ham, there used to be a guitar club, but it hasn’t been active in years.

“I went to the older students and asked them if they would be interested, and a lot were,” Ham said. “So I had a lot of interest from both the underclassmen and the upperclassmen as well.”

It may seem a tad pointless to have a guitar club in addition to the regular classes, but Ham actually sees it as a huge benefit.

“One of the greatest things about having a club rather than just a class, is all the things students are working on outside of class they get to perform for the club,” Ham said. “In guitar class we have tests to do, performances, assignments we need to prepare for. Something at guitar club could be just something that they learned at home.”

Despite the extra time and dedication it takes to sponsor a club, Ham is positive about being able to run it.

“It’s really cool seeing a lot of students coming in to get excited about guitar,” Ham said. “Some of them aren’t even actually in the class. It is a really great outlet to play guitar that’s not class”

Meetings are from 3:30 to 4:30 on Thursdays in Room 123 and usually consist of initial chatter, introductions and then the more advanced students will pair up with the novices to share their knowledge.

Another alternative way to spend some time after school is by taking part in baking club, which is sponsored by Phyillis Wright. The club, headed by students Emma Gardner and Sydney Goeman, had more support than they initially expected.

“They (Gardner and Goeman) were excited because each of their friends said they were coming, and I had some that were coming. So we were looking at around five kids.” Wright said. “We walked into that room, and there were over 30 kids in there. It was packed. It was boys and girls, and we were all really excited about learning to bake.”

Despite the large number of participants, they managed to keep everything organized and orderly.

“We had them broken into groups, had a leader for each group, and explained the rules and how they’d planned to clean everything,” Wright said.

It took quite a while to get everything cleaned and ready to go, but when it was, Gardner began to show the class her skills.

“Emma baked her batch of cookies, as a demonstration, and shared them,” Wright said. “They were very good, and had a simple recipe that new bakers would be able to follow.”

The baking club meets on Mondays in Amy Portmann’s Room 153. Everyone has to bring their own ingredients and aprons if they plan on baking with the group.

Clubs take time and dedication to set up, and aren’t made in a day. One that’s currently going through the process is the Green Earth Society. Student head Neel Bolaram said he’s starting the club to help people focus more on protecting the environment.

“There’s a lot of bad stuff happening to the environment, like icebergs melting, catastrophes, natural disasters, and people need to understand more about the planet that they live on,” Bolaram said. “And it made me understand that I should create a club to help people help the environment.”

Bolaram’s ideal meeting is all about learning and getting to engage and know the environment that we live in better.

“I would like an average meeting to begin with a lesson of some sort, and having people to interact with the lesson and be enlightened by the lesson,” Bolram said. “Learning things like the impact of recycling. And then probably continue to do some service outside, planting trees and picking up trash, and spreading more recycling here in Wichita Falls.”

Bolaram said he wants the Green Earth Society to become a symbol for making a better future. He’s hoping to have the club up before Christmas and plans to have meetings either on Wednesdays or Thursdays in Christopher Preston’s room.