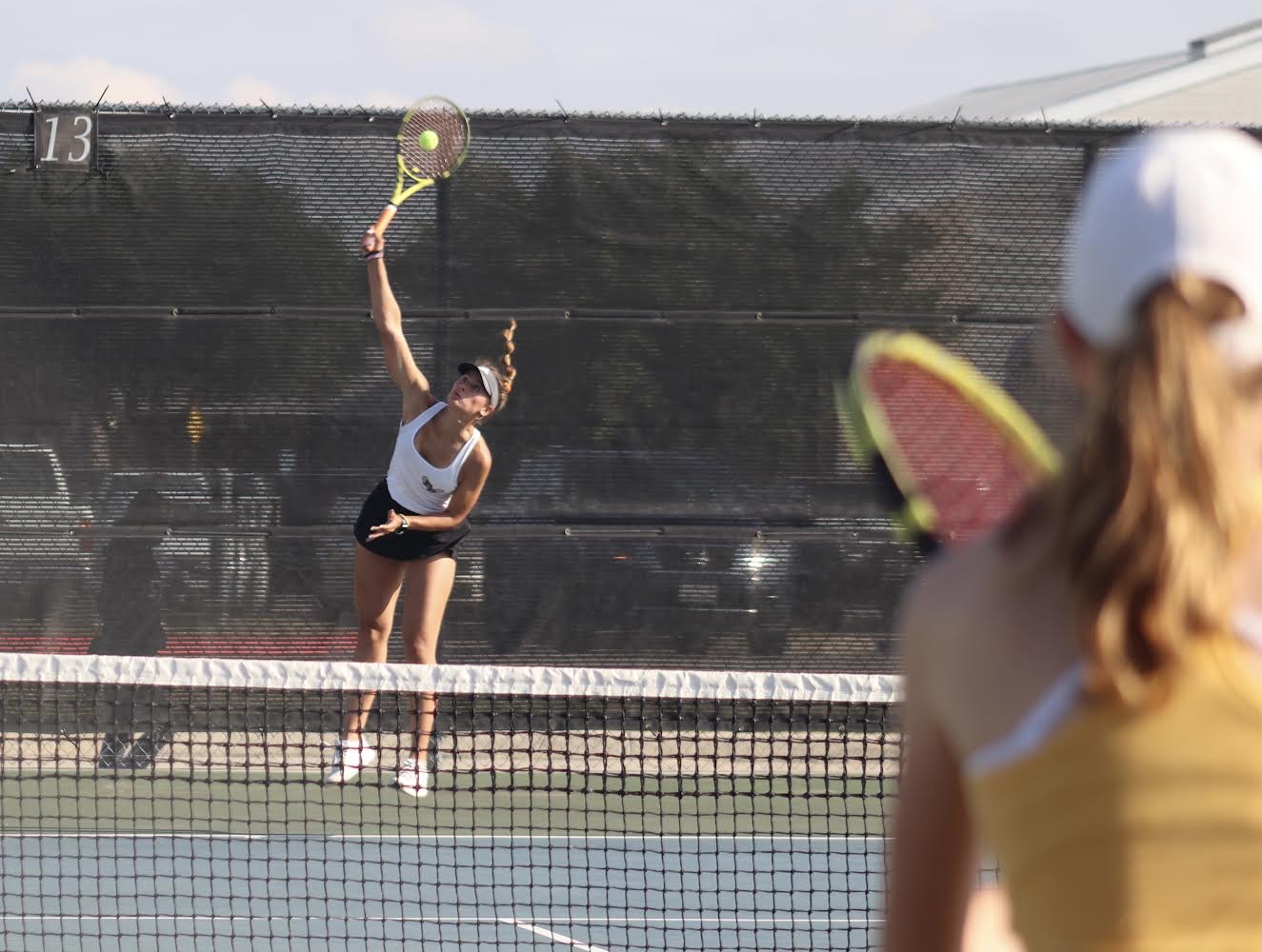 Senior Axelle Jacquemin returned to the Northside Tennis Center for the second time as a state qualifier. (Sandra Le)

Senior Axelle Jacquemin returned to the Northside Tennis Center for the second time as a state qualifier.

The sun beamed down upon senior Axelle Jacquemin. Following the overcast skies on days prior, the weather was perfect for a tennis match.

This was Jacquemin’s final high school tennis match, and she could feel the pressure weighing on her.

Perseverance. Jacquemin fought hard against the thought of giving up. She had made it to the finals of the 5A state championship and was close to a possible state title.

“I felt really excited,” Jacquemin said. “I thought I could potentially do it. Even though playing at regionals was hard, I believed I could do it since I was no longer injured.”

“Let’s go Axelle!” someone called out from the bleachers and she looked over, shaking her head. It was the third set of the state championship finals and she was down 5-4. One more point and her opponent, Eleanor Archer from Amarillo High, would be the 2022 state champ.

Jacquemin returned Eleanor Archer’s serve and engaged in yet another fierce rally, but when the Rider senior’s backhand shot found the net, Archer claimed a 5-7, 6-4, 6-4 victory.

It was the second time in the past three weeks they had played each other. During the regional finals match, Jacquemin dropped the first set against Archer and rallied for a 2-6, 7-6, 6-3 victory.

“I was like, ‘Oh crap’ in my head when I heard she would be my opponent,” Jacquemin said. “I already played a three-hour match against her at regionals, so I knew this match would be really difficult.”

Despite the loss of a state title, Jacquemin’s three years playing tennis at Rider had been filled with eventful road trips (games included), late-night hotel room talks and unforgettable memories.

“The experience was great,” Jacquemin said. “It feels nice having the emotional support there for me after my matches when I cry because I get to hug everyone. It was all fun while it lasted.”

Jacquemin began her tennis career at the age of three at a club in Belgium.

“My sister and brother were practicing, and I was playing against a wall,” Jacquemin said. “This coach came up to my mom and was like, ‘You should put her in classes.’ And so she did.

“Tennis means a lot to my family. My dad played, my sister, brother and mom still play. Even my dog plays, she’s the ball girl.”

Coming to Rider as a sophomore from Belgium, Jacquemin believed her high school experience would be just like “High School Musical,” but everyone rode horses.

Needless to say, she was confused on her first day in Texas.

“My first day of high school was really awkward because I didn’t know what to say because all of the teachers were like, ‘We have a new student, please stand up’ and I only knew one sentence in English,” Jacquemin said.

Tennis was an escape from her horseless reality. Throughout the past years playing for Rider, Jacquemin has made a name for herself and even found a new love for the popular sportswear brand, Lululemon.

In 2021, she qualified for state, but fell short in the first round. Her continuous determination led her through an undefeated streak senior year, qualifying her for the 2022 state championships.

“Last year was kind of sad,” Jacquemin said. “This year, my goal was to win the first round, but we made it to the finals. It was really fun and I’m sad that it’s all over now.”

Jacquemin will continue playing tennis the next four years at Lubbock Christian University.

“I’m very excited for this new path in my life,” Jacquemin said. “I’m excited to know when we start playing and how the practices will go. It’s college–it’s a new level.”