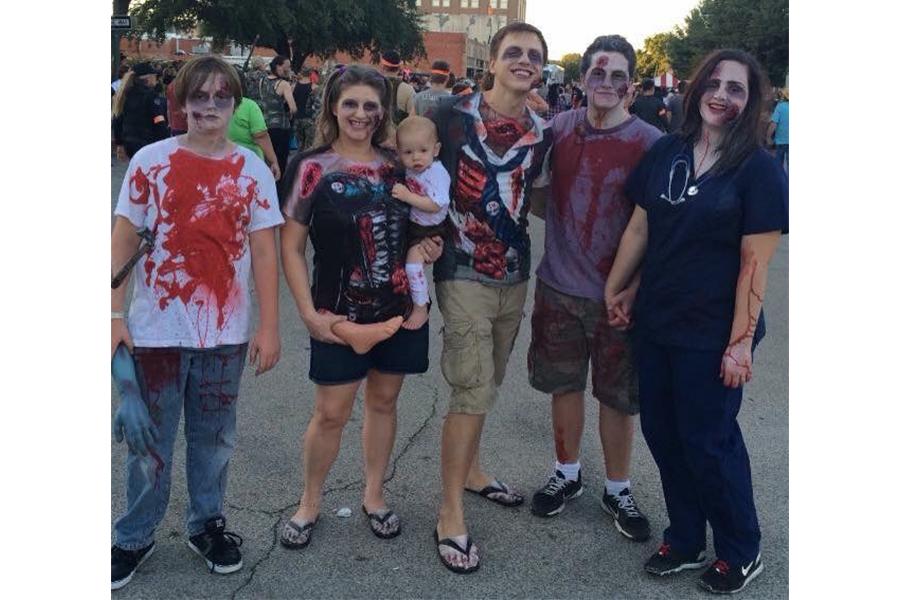 nglish teacher Jennifer Doughty has attended with her family every year since the event’s conception.

Dance Of The Dead

The putrid corpses of twisted circus performers rise from the dead and march the streets in a horrifying display of absolute terror. They seek only to terrify and consume their prey and will not stop until their hunger for chaos and flesh is satisfied. Just when all hope seems lost, a circle opens up in the undead crowd. Inside: a team of zombified dancers. The crowd goes quiet as the music starts. No, it’s not a scene from a bizarre zombie film, it’s Wichita Falls’ annual Zombie Crawl and D1E K Run.

The event has been going strong since its debut in 2010. Though the crawl itself is free, all proceeds from the race stay local, benefiting the American Red Cross and downtown Wichita Falls development. In addition to the crawl there are booths, the run and live music. The crawl features a performance of Michael Jackson’s classic song Thriller and its original zombified choreography all put on by a team from Dance Etc. Two Raiderettes, Hope Slack and Kaylee Davenport, will be part of this annual tradition tomorrow.

Junior Hope Slack has performed at the Zombie Crawl many times and has been attending Dance Etc. for 13 years.

“We normally do Thriller and then a popular song that we can get the crowd into,” Slack said.

Songs in past years such as “The Wobble” and “Gangnam Style” create anticipation to see what song will be used this year.

Sorry, there are no polls available at the moment.

Hope said that over the last few years the team starts the performance with a routine to the theme song of the popular zombie drama show “The Walking Dead” followed by their usual performance of Thriller and afterwards, a fun dance song for the crowd.

Joining the undead display for the first time this year, sophomore Kaylee Davenport is more than ready to shock and amaze.

“They ask you if you want to perform Zombie Crawl and if you do, they give you information,” Davenport said.

The girls had their first practice on Oct. 4 and are sure to deliver an exciting show, centered around “Michael Jackson’s Original Thriller.”

People from near and far come every year to witness this horrifyingly fun event. English teacher Jennifer Doughty hasn’t missed a single crawl since the event’s conception in 2010.

She, her husband, and sons always dress up as well, having themes ranging from “prom night” to “baby zombies” to “Bride and groom.” This year they will be going as “Walking Dead zombies” and will be dressed to scare.

“I love that our city has the Zombie Crawl,” Doughty said. “Though people say Wichita Falls is lame, a lot of people drive from other cities just to come to this event.”