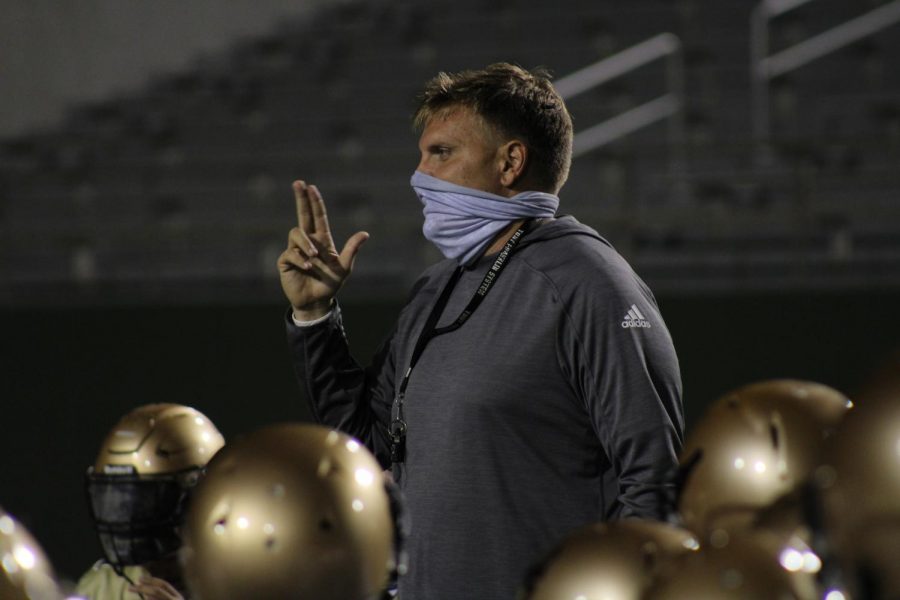 Coming off a 9-5 record and second consecutive trip to the state quarterfinals in 2019, this year the Rider Raiders are anxious to back up their lofty state ranking. With multiple athletes committed to Division I colleges, the Raiders have aspirations of another lengthy playoff run. The Rider Chronicle sat down with head football coach Marc Bindel to discuss COVID procedures, new players to watch and future expectations.

Q: How do you think COVID will affect the players and their performance?

A: I don’t think it’s going to affect their performance. I think it’s going to affect their preparation a little bit. Just from the standpoint that there’s a lot of uncertainty. We’re going to prep like we’re going to play every game, but not every game is guaranteed. At any moment, we could have to cancel or a couple players may be out or a couple coaches may be out at a time. There’s a lot of uncertainty that goes with that, but as far as getting ready to play, I think we’ll be OK.

Q: Are there any special precautions you have to take in order to protect the players and coaching staff?

A: The UIL gave us some guidelines and WFISD, our director and superintendent, we have to follow their rules as far as keeping the balls clean and cleaning the racks. We have to wear a mask when we’re actively working out and we’re taking that one step further by wearing a mask at all times. We also bought some face shields for our helmets which is new this year.

Q: What are your expectations for this year’s season?

A: Our plan is to have a successful season. I think we know that nothing’s guaranteed, so we’re just going to take everything one game at a time. And whatever game they let us play we’ll play and we’ll go from there.

Q: How do you feel about being ranked sixth in the state?

A: It’s an honor, but I think a lot of it is based on how you did last year. So, I like the fact that they respect what we did last year, but we’ve got a new team. We do have a lot of returning players, but this is a new team, a different team. I’m excited about us making our own path and being able to take the season and earn a ranking like that.

Q: With so much experience on the field, where do you need to make improvements from last year?

Q: Which newcomers do you expect to make an impact this season?

A: We have, on the offensive line, we kind of have four varsity returners. We have a move-in, Chase Stafford, who went to McNiel then played in Archer City for two years and came back. So, we’re really excited about him offensively. Defensively, Luke Gambs is going to be a sophomore and we’re really excited about the plays that he’s making and him getting better. And then Harley Cottingham who was on varsity last year but didn’t start, he’s getting put into a starting role. We’re excited to see how those guys kind of mature and get better. And Jack Pitts is a sophomore playing safety, so just watching him get better every day. He also plays quarterback for us. We’re just excited to watch those guys mature and grow with this group that we have.

Q: How has your team been able to rally around Kaleb Honea’s family after his passing this summer?

A: No one really knows what to do or say in situations like that. It’s just been really, really hard. You can’t even imagine what the family’s going through. We just offer our support, we want to be there for them. We try to, if we have things like yards signs, jerseys, decals, those types of things. We just want to make sure that their family is included in those because we know how much Rider football meant to Kaleb and how much it means to their family.