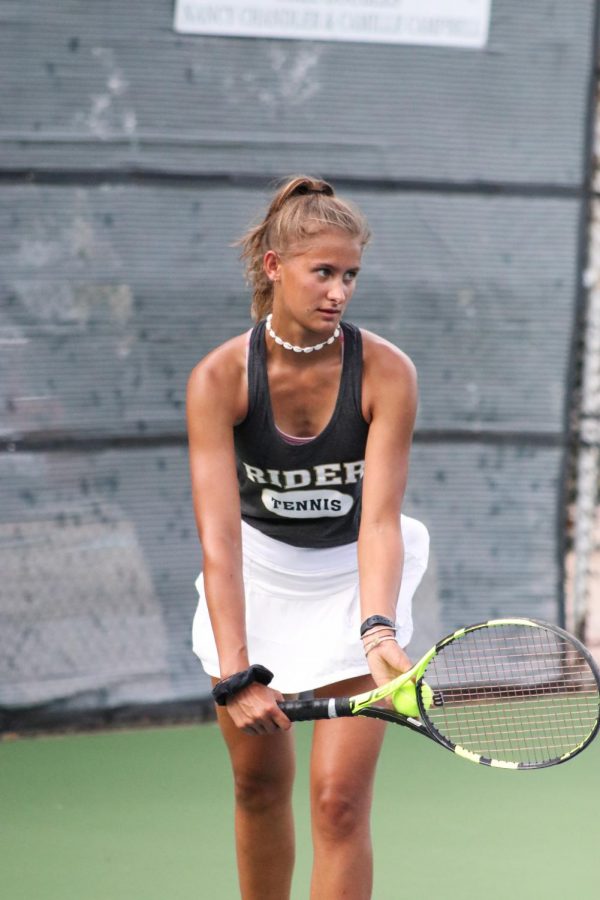 Rider tennis player Axelle Jacquemin has thrived on and off the courts since moving from Belgium in August.

The Rider tennis team is diverse this year with three foreign students participating. Junior Coen Houtsma and his freshman brother Bas left the Netherlands more than a year ago, but this is their first year in the program.

Sophomore Axelle Jacquemin is a new asset to the team after arriving from Belgium right before school started. All three relocated to Wichita Falls because of parents in the military.

The Rider Chronicle sat down with Axelle and Coen to get their views on their new home and expectations for the season.

Q: What has been the biggest difference playing in the U.S vs your home country?

Axelle: U.S. is the heat. Belgium is pretty cold, so it’s like cool to play because it’s not so hot. You don’t have like stay and drink a lot of water and the surface (of the court is different).

Coen: The amount I’ve played. I play here like every day and in Europe I used to play like twice a week. Here in America they’re more competitive school-wise. Where I’m from they don’t play like tennis in the schools but at a club, so that’s all new for me. It’s more like a family and more like a daily thing now.

Q: How have you been adjusting to the team after joining it?

A: I just be myself and I went to the team and they accepted me.

C: Tennis is more of a family. Tennis I feel like I fit in more because (when I was in) basketball, I just didn’t fit in with the culture and I wasn’t good enough.

Q: What are you hoping to achieve here at Rider and to improve going into the season?

A: I would like to win all of the games that I’ve played and to support my team.

C: Just to play well, to have fun, get good grades and help the team out. I would like to improve my serves and the consistency.

Q: What has been the biggest challenge here?

A: The problem was the language and the heat. There were only two problems I had. My English is better and the problem with heat gets better too.

C: I think in the beginning when I first moved here (it was) the language, but after that it was all the new stuff: the new school system, new people.

Q: What’s your favorite new food that you discovered here in America?

A: Fast food: Chick-fil-A and Whataburger. They are good.

C: Fast food, any fast food; I’m an easy eater, I’ll eat anything you’ll put in front of me. I like anything.