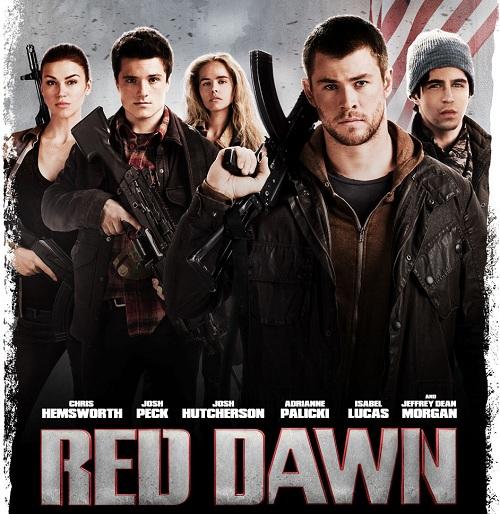 America seems to be obsessed with war.  We’re not satisfied with the carnage and crimson trails left behind overseas, and video games like Halo, Modern Warfare, and Call of Duty bring the action right into our living rooms. But that’s not the half of it. Some of the highest grossing box office figures have come from films such as The Hurt Locker (2008); 300 (2007); War Horse (2011); and most recently, Red Dawn (2012) starring Chris Hemsworth, Josh Peck, and Josh Hutcherson. The 2012 film is a remake of the 1984 Red Dawn that starred Patrick Swayze, C. Thomas Howell, and Lea Thompson.

When the first version of the film was released in 1984, the purpose of the film was to shock the public.  And shock it did.  The film was the first to have the brand new PG-13 rating tacked onto it.  And if put side-by-side, the newer creation of Red Dawn would more than likely be “cleaner” than the original. However, Red Dawn is not a film I’d advise taking a child OR teenager under the age of 18 to see. The movie is actually fairly clear of blood, gore, and sex. But it’s not clear of the seventy or so times that profanities like the f-bomb, and a considerable dictionary of choice vocabulary. It endorses the idea that it’s perfectly alright to shoot the person who shot your family right back.  After all, if someone takes something of yours, you get to take something of theirs.  An eye for an eye. Right?

I disagree with Haley’s opinion on Red Dawn. First because even though there was violence, the amount of gore was tiny to non-existent, lacking even a blood spatter when characters were shot. This sounds vicious, but compared to video games where the target audience is boys between 13 and 20, the movie was incredibly tame, getting a PG rating in Canada.

Also in stressful situations such as your hometown suddenly being invaded by angry North Koreans, colorful language is expected and if anywhere in the movie a character said “oh darn” when they were under fire then the movie would lose the little amount of believability it had.  Which is important so that we can sympathize with this group of rag-tag teenagers trying to retake their hometown. The movie had one sexual reference which is astounding when we reconsider the target audience is boys age 14-20.

Red Dawn is filled with life lessons even during war, like personal sacrifice, infallible love, forgiveness, and inevitable mortality.  For example, in most action movies the main characters seem invincible, but in Red Dawn their original group lost their leader as well as others, however the leader’s brother carries on the fight for freedom, honoring the memory of his father and brother who were casualties of war.