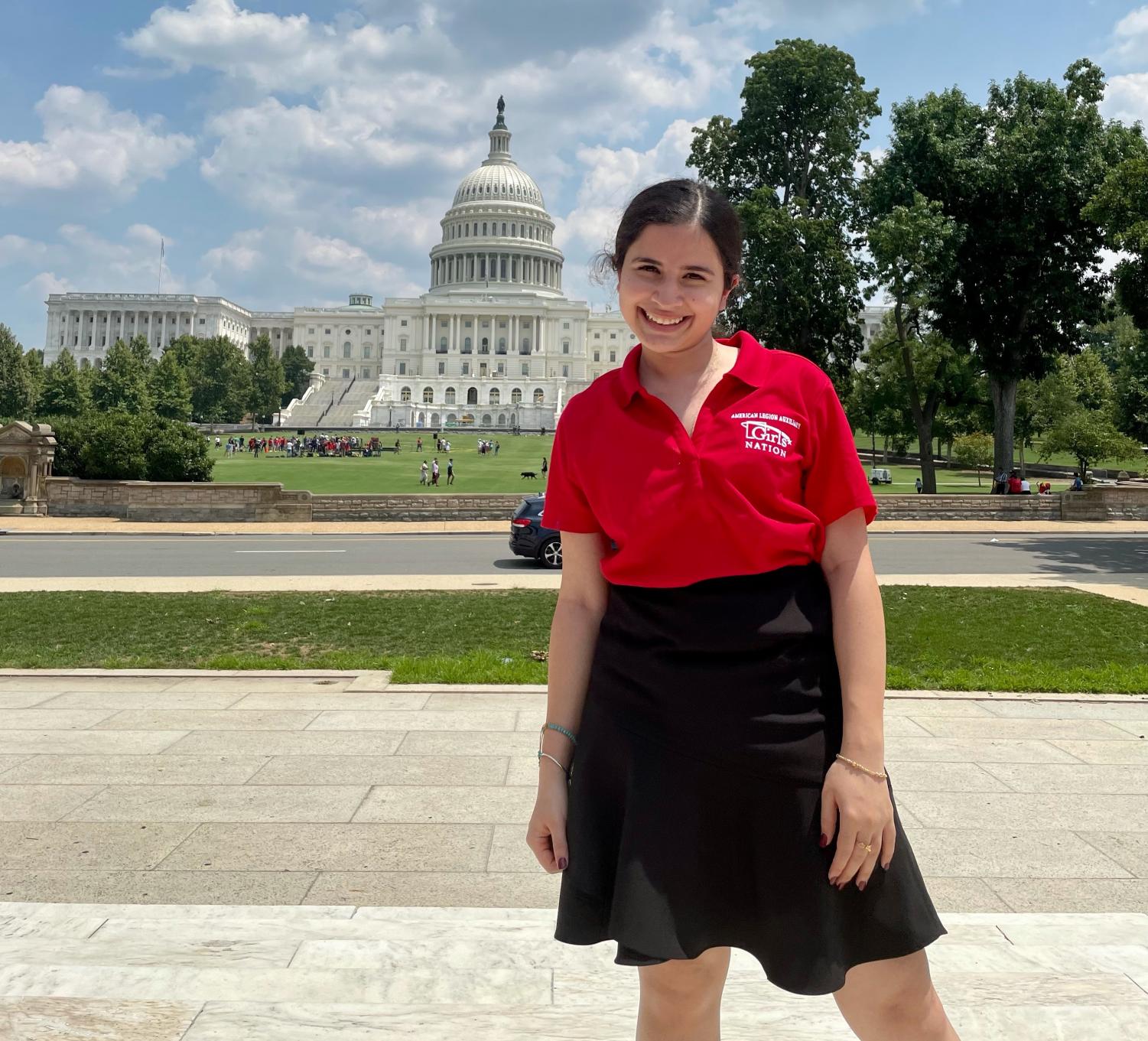 Tina Majdinasab was chosen as a Texas Senator for Girls Nation this summer. (Courtesy)

Tina Majdinasab was chosen as a Texas Senator for Girls Nation this summer.

From student to senator

Pure astonishment was all that Tina Majdinasab experienced her first morning in Washington, D.C.. Despite the grudgingly early 7 o’clock wake up time, Majdinasab felt excitement coursing through her veins as she stood for the Pledge of Allegiance.

The Rider senior had recited the pledge on numerous occasions growing up, but this time was different. The 17-year-old — with an undying passion for law — was one of only two young women selected to represent the state of Texas at American Legion Auxiliary Girls Nation.

“It felt like I was on top of the world and I couldn’t believe that it was reality,” Majdinasab said. “I felt like all of the failures that I had experienced in the past couple of years in high school had led me to that moment.”

Politics has always been a field Majdinasab is passionate about. She joined Teen Court the summer before her eighth grade year, pursuing her interest in law. Over time, Majdinasab formed a fascination with government, and progressed to become the Wichita County Junior Bar Association president. Through her time serving in Teen Court, Majdinasab worked her way to competing in the American Legion Oratorical Contest.

“The amount of growth I’ve experienced over the past four years is immeasurable,” she said. “I’m confident that I wouldn’t have been the person I am today if I hadn’t stepped out of my comfort zone to volunteer.”

Majdinasab didn’t expect much success after falling short of her goal at the oratorical contest. She had progressed to the division level her sophomore year, but came in much lower than she anticipated in the recent competitions.

Much to her surprise, American Legion No. 169 vice-commander Michael Kurtz had been impressed by Majdinasab’s hard work during the oratorical contest and nominated her for Girls State.

“Nominating Tina was really a no-brainer. She’s super smart and very driven,” Kurtz said. “When I made the pitch to the auxiliary, it was unanimous, we were very proud of the way she represented the post in the oratorical competition.”

During the virtual closing webinar of Girls State, almost 670 girls in the state of Texas awaited their names to be called for a chance to represent Texas at Girls Nation as a senator. Only two girls would be chosen out of the numerous qualified individuals.

The first was Lauryn Hobbs from Flower Mound. Majdinasab anxiously stared at the screen of her MacBook Air, waiting for the second name.

The director continued to announce the city she lived in before Majdinasab shrieked as if she’d never done so before.

Traveling to Washington D.C. had always been a dream of Majdinasab, and because of Girls Nation, her dream became a reality much earlier than she expected.

“I felt a great sense of honor that I was chosen out of so many highly accomplished girls who attended Girls State to participate in Girls Nation,” Majdinasab said. “I knew that Girls Nation was essentially a program focusing around everything that I’m passionate about, so knowing that I was going to be a part of that was unbelievable.”

During her weeklong July trip to D.C., Girls Nation separated into two groups, Nationalists and Federalists. Majdinasab was part of the Nationalists, and was elected as the majority whip. Throughout her time spent with Girls Nation, Majdinasab participated in mock senate sessions.

“Importantly, the senate sessions taught me lessons that I will always take with me throughout life, like to never succumb to pressure from others when I know what I’m doing is the right decision, which was especially important to know while deciding what bills to vote yes or no for,” she said.

Her trip to D.C. wouldn’t have been especially memorable without visiting capital’s most infamous landmarks. Majdinasab will never forget the breathtaking view of watching the changing of the guard at the Tomb of the Unknown Soldier or the eternal flame blazing next to John F. Kennedy’s grave.

Don’t be deceived by her 4-foot-8 frame. Tina Majdinasab’s dedication to her passion is a force to be reckoned with. While Majdinasab’s trip to the national capital may have been short, her passion for government is anything but.