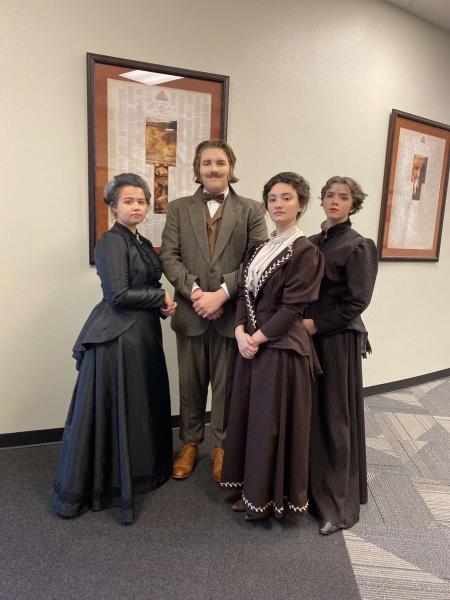 Sam Eytalis (Last person on the right) stands with other actors in their costumes for the UIL show.

After receiving the chance to move on to bi-district, the theatre department was met with some devastating, but predictable news about one-act play.

Due to the virus, the competitions have been pushed back until at least May. The Rider Chronicle sat down with senior Sam Eytalis, who was looking forward to her first and last UIL event.

Q: How was theatre going before the quarantine?

A:  It was getting to be so fun. Every year with them has been incredibly enjoyable, but as a senior it felt so much more jovial and comfortable. I wasn’t scared to be on stage anymore, but the excitement was still there, and I got to be with my closest friends.

Q: What was your reaction when your UIL events were postponed?

A:  The latest thing we were told was that it was postponed until May 4, but everyone kind of knew that we probably weren’t going to perform again. My first reaction wasn’t actually super sad, mostly understanding. We had only competed once, so it wasn’t super far into competitions.

Q: Do you wish you could still perform?

A: Definitely, it was such a good show. I would wish for nothing else.

Q: How does it feel that this was your last chance at UIL?

A: Sadly it was also my first chance. This was my first year doing anything UIL, so it sucks even more. I had auditioned previous years, but I was never casted. This year I finally was. It’s really depressing. I had worked so hard over the past four years to show I had the chops for UIL, then it got taken away as soon as it started.

Q: What now? What’s going to happen in the future?

A:  I’m not sure. There’s also senior-directed one acts, which is our school’s last show, but after lockdown and everything, I don’t think we’ll have the chance. Which also super sucks for me, because I was going to be a director! I was really looking forward to it and now I don’t even know if it’s going to happen. Everything is in the dark and it’s likely nothing will be the same.

Q: What made you the most upset?

A: Just all the lost chances. The actual cancellations themselves make sense, but we had finally been able to prove ourselves and now it’s gone. We could’ve gone so far.