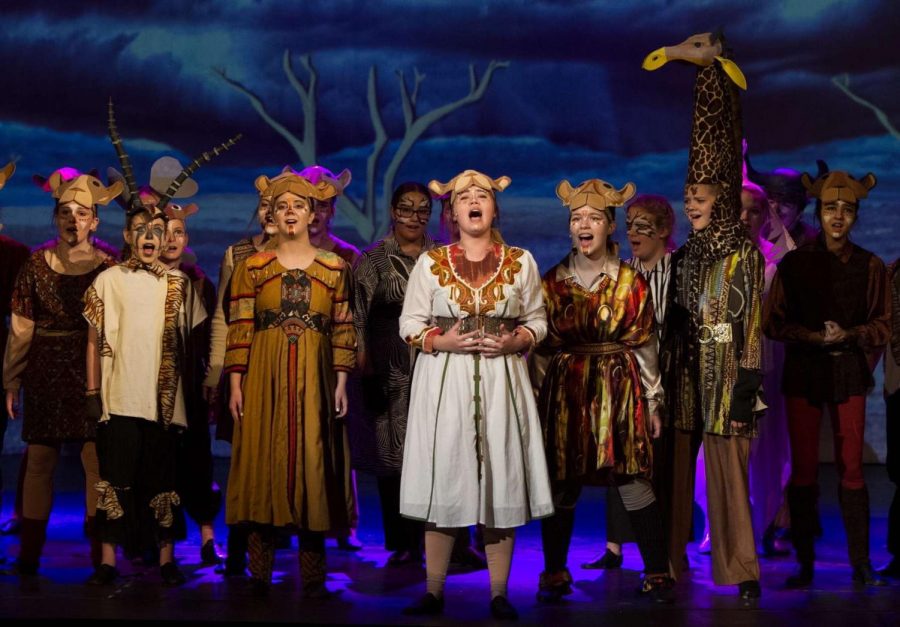 The Lion King has three shows this weekend and ends the following weekend.

Within the crowded halls of the school, sophomore Londi Reid is an average, everyday 16 year old. But under the lights of the Wichita and Backdoor Theatres, Reid is a well-known performer.

“I started performing when I was really young because I had seen shows there and was like ‘that’s what I want to do!’” Reid said. “As soon as I turned eight, I auditioned and that’s been my life since then.”

Not only did her love for musical theatre continue to grow throughout the years, Reid also shared her passion with her boyfriend, junior Spencer Simons, who will be seen on the stage of The Lion King as Mufasa.

“She was the one who convinced me to audition for Newsies and ever since then, I’ve been a huge Broadway nerd.” Simons said. “Now, I’m super into musical theatre and I would say it’s all because of Londi.”

His love for theatre didn’t begin in Newsies. Simons was bit by the theatre bug in middle school when he was featured in Legally Blonde Jr. at McNiel. Simons continues devoting his time in theatre at Rider plus the Wichita Theatre.

“I want to perform as a career. At present I’ve done 20 shows in the three years I’ve been doing theatre,” Simons said. “I do it because it’s a good opportunity, and I didn’t have it where I used to live and I take as much advantage of it as I can.”

It’s a hectic time for Reid and Simons because not only do they have prominent roles in The Lion King, but they’ve also been rehearsing a great deal  in Rider’s auditorium for their upcoming one-act play.

“I think the hardest thing about it is committing time because you have to split it between school and community theatre and just traveling back and forth is difficult,” Reid said. “It sucks up so much time.”

Rider district one-act play is Friday in Abilene, which means Reid, Simons and junior Macy Davis all have understudies to fill in for their roles Friday night in order for the show to go on.

“Time management is the most difficult to balance between the two,” Davis said. “Rehearsals here go for so long and then you have to go straight there and you get home so late, so it’s hard to keep up with everything.”

Balancing both theatre productions takes a lot of commitment and perseverance in order to put on a great production.

“So much hard work goes into putting on a successful show,” Davis said.  “Memorization, listening to your director, knowing your blocking, doing what your directors ask and then going past that to keep yourself, in the eyes of everyone, as a good performer.”

Davis has also developed a passion to continue being a performer as she grows older. She fell in love with the art of performing as an entirely different character.

“You get to hide behind the mask of whatever character you’re playing on stage, so you really have such an outlet on stage to be someone you’re entirely not,” Davis said.

Although some would think the work that goes into performing in a musical and a play are similar, there are many differences between the two forms. Unlike high school theatre, performing in a professional setting can be overwhelming, whereas at school, Simons said it can be more casual and light-hearted.

“It’s like a bigger production. There’s also a lot more people going to watch the show,” Simons said.  “Here you get maybe 30 or 40 people. At the Wichita Theatre, I remember one show of Newsies had like 400 people.”

With many performances comes fresh motivations to take the stage. It may be daunting for some newcomers to find a voice in the shared spotlight along with more experienced actors.

“Do it, it’s so much fun. Everyone is super supportive of you, there’s not really a huge pressure on you, it’s super casual,” Simons said. “We all support everyone no matter what their interest.

“I would highly recommend it if you feel like getting out of your comfort zone for a completely different experience. Even if you don’t like being on stage, you can work backstage and it’s still a lot of fun. I’ve done both, it’s great.”