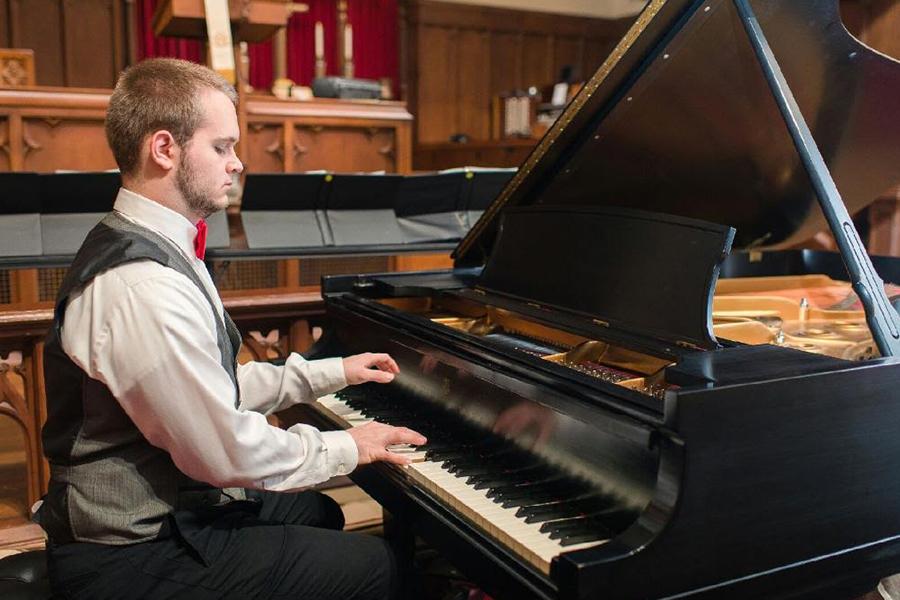 Raider Of The Month: November

It’s not that he doesn’t like talking; it’s that words aren’t enough for him. Words crowd what he tries to communicate and he can’t get across what he wants to say when he does talk, so he stays silent. Senior Levi Lamb goes through classes without saying a word unless directly spoken to, but in his head he has ideas and explanations and expressions. He doesn’t speak them. Instead, he plays them.

His English project is to show that he understands Hamlet.

Easy enough. One student rewrote the first act, another made a clock, someone made a painting hung upon the wall.

Lamb sits silently until he is called to present.

He explains his project, describes how he interpreted the play, then cuts his gaze to the teacher and, with a nod, asks her to start the video. Students turn toward the projector and see Lamb sitting at a piano with his back straight and feet on the pedals. His hands hover over the keys as he bounces them to the beat he has yet to play, then he presses the first key, and then another, and eventually he isn’t focusing on each key individually at all. Instead, he focuses on the piece he’s composed as a whole.

The students are silent. They look back at Lamb.

“Man, that was incredible.”

He smiles, nods and takes his seat.

The project was broken into five parts not because Hamlet has five acts, but because it’s easiest to write music like that.

“They never questioned my motives and they always just want me to do well,” he said. “They give me a net to catch me in case I fail, and I do my best knowing everyone I love is behind me.”

Support flows in from all aspects of Lamb’s life. His family, his friends, his church, everyone. They see his passion and they want to help in anyway they can.

Lamb doesn’t know where he would be without his grandparents’ first step that introduced him to music, but his life has been changed because of it and he said he couldn’t be more grateful.

“Music has opened a new world for me,” he said. “It’s given me the chance to actually put myself out there in ways I never could have. If I had no music, I would still be the quiet guy that always did his work, but it’s given me an outlet to express myself and show people what I can do.”