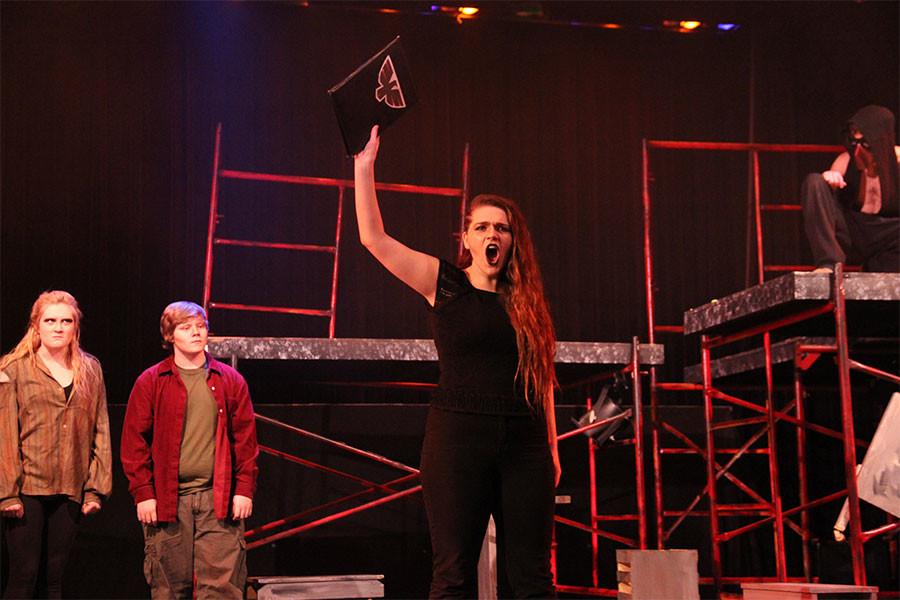 It is a Wednesday afternoon. The theater is empty.

The house lights dance around the room as cast members fill the aisles with flower petals.

It’s the second to last rehearsal before opening night.

“None of us including J have ever done anything like this,” senior Claire Apple said.

Apple is talking about is Rider Theater’s main stage presentation of William Shakespeare’s Julius Caesar, post-apocalyptic style. Theater students say teacher Paul Jefferson decided to do this play in a post-apocalyptic time period because he wanted something that would be interesting and new.

“Obviously Julius Caesar is an original, huge play to put on,” junior Emily Frerich said.  “But just having that twist on it makes it more appealing to younger audiences.”

Along with the post-apocalyptic twist, females played the parts that were originally cast for men.

“We wanted to give women the chance to play these parts that were written for men, but play them as strong female parts,” senior Cameron Sonsini said.

Senior Bonnie Lambert played the character of Cassius who persuaded the people to go through with the assassination of Caesar. Lambert believes that playing this part as a woman had a different feel to it but at the same time, was more interesting to see.

“Not many women especially in Shakespeare’s shows are put into that kind of position where they get to be powerful,” Lambert said.

“My best friend during this show was Sparknotes, No Fear Shakespeare,” Frerich said.

As the play transitioned from the first act to the second, some actors also had to  transition into different characters. Senior Joey McGinn played a conspirator in the first act, then a soldier in the second act.

“When the armor comes on, the sword comes on, the boots and the uniform come on, it sort of pieces [the character transition] together for me,” McGinn said.

Senior Cameron Sonsini who played the part of Julius Caesar says that in every play he learns something new. For this production, he says the lesson learned is that power has an effect on people.

“They way you present yourself, the way you carry yourself, can really display your power and your authority,” Sonsini said. “I had to work a lot on that because I have never played a character with that much authority and power.”

It is a Friday evening. The theater is now full.

The house lights dance around the room as cast members fill the aisles with flower petals once again.