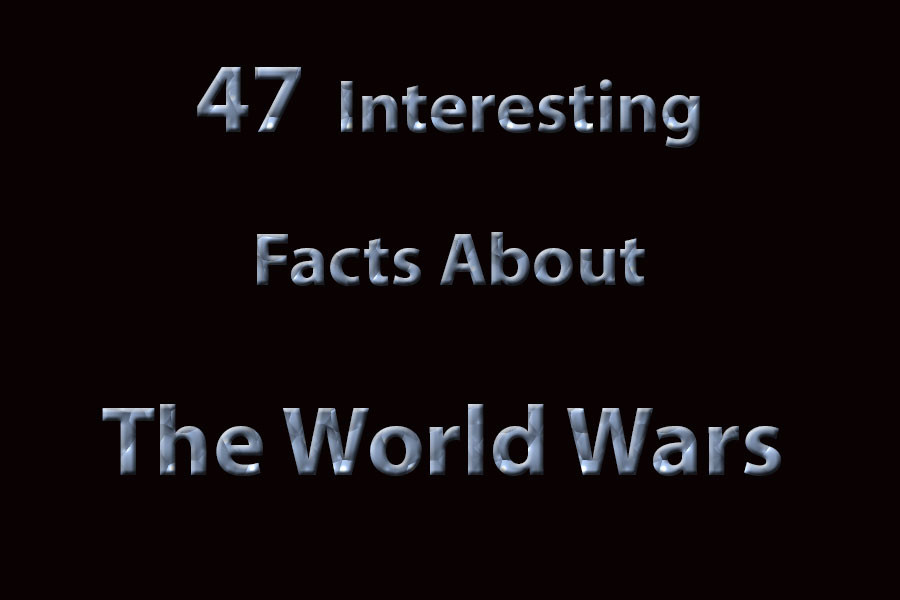 2.) Hitler nearly died twice in WWI, from nearly getting shot by a British soldier and from mustard gas. (By the way that british soldier decided to give Hitler a chance who at the time was a messenger. Guess that means you should shoot the messenger, because he might become a dictator.)

3.) Hitler got his famous mustache from a gas mask that wouldn’t seal properly on his face and as a result had to shorten his mustache.

5.) Areas with machine guns and mines and barbed wire were labeled as “No Mans Land” areas.

6.) Hitler signed up for the German military at Germany and not Austria. The reason for that was Germany was recruiting people without thinking twice while Austria would only take in people that were physically acceptable.

7.) American M4 Sherman tanks were referred to as “Tommy Cookers” or “The Ronson” (Ronson is a British-made lighter.) because of their tendency to catch fire after getting hit once.

9.) If you were in London while it was repeatedly bombed, you would have to turn off your house lights to avoid getting your own house blown up

10.) The Daleks in Doctor Who are based on the Nazis during WW2.

11.) The German government thought that if they put Hitler in office, he wouldn’t be much of a threat. They were so wrong.

12.) Hitler had his political enemies killed by his SS troops in one night. This night would be called, “The night of the long knives.”

15.) Joseph Stalin’s guards were so scared of him that they didn’t help him when he was having a stroke.

16.) American soldiers would bang empty rifle clips on their helmets to draw German soldiers out of cover. ( This was because the M1 Garand rifle would eject an empty clip with a loud clang after the clip ran out of ammo.)

17.) In WWI machine guns often ran into a problem where if they were used repeatedly their barrels would melt causing problems. To fix this problem some machine gun barrels had water in them to cool off the barrel. A bad problem with that was if the barrel ran out of water, then you would have to pee in the barrel causing corrosion problems.

18.) Germany was the first nation that made assault rifles.

20.) Since WWII France was given the stereotype that they were cowardly because they surrendered when Germany invaded.

21.) When Germany was invaded by the Allies, people were drafted despite being too young, too old, or unfit for duty.

22.) A relative of Adolf Hitler changed his name to avoid being arrested and/or executed.

23.) German grenades had a fuse of 2-3 seconds meaning that soldiers had to throw the grenade immediately.

24.) Churchill, George S. Patton and Stalin got their own tanks named after them.

25.) In WWI Germany brought Vladimir Lenin out of exile and brought him back to Russia to keep them out of the war.

26.) Japan was originally going to be invaded like D-Day because of frequent bombings from the US. Also if we didn’t drop the bomb, Japan would have been invaded by Russia also.

27.) In Germany children between the age of possibly 7 to 12 were in a program called the “Hitler Youth,” their job was to defend Germany and kill any allied troops if possible.

28.) In WWII the word “panzer” popularly means “tank” and is a common word to WWII vets and tank enthusiasts today.

29.) After WWI Hitler was hired as a German spy and was sent to monitor the “German Workers Party,” and decided to use them to his advantage.

30.) Stalin had killed more people than Hitler. This is because of Stalin’s own concentration camps and the KGB.

31.) Benito Mussolini came into office from being popular on a local radio station in Italy.

33.) Nazi Germany planned an invasion of Switzerland, but Hitler thought it was unnecessary since they had most of Europe under control and thought that Switzerland would be conquered invasion or not.

34.) Hitler is not the only person in history to try and invade Russia. In fact Napoleon Bonaparte was the first person to try to invade Russia making Hitler the second.

36.) Japan originally planned a biological attack on the united states with similar death toll as the Black Plague, but this was prevented thanks to the atom bomb dropped on Hiroshima.

37.) When the Allies Invaded Germany’s border, several German troops disguised themselves as American troops to sabotage the Allies efforts to proceed further into Germany. This tactic however didn’t last long, as Germans caught pretending to be American soldiers were executed.

38.) After WWII ended, Russia ran out of vodka after celebrating victory.

39.) The Nazis had several design documents for “Hitler’s Wonder Weapons”. If it weren’t for Allied bombing these weapons would have been mass produced and used to conquer most of the Allied countries. Some of these weapons included a surface-to-air missile and a giant armored tank the size of a football field.

40.) Several tons of bombs from the Allies are still around and active, buried under Germany. Several bombs are dug up every year in Berlin and other German cities or towns. The scary part is some of those bombs are still armed and can explode at any given time. This even includes bombs that were dropped on London.

41.) Germany destroyed several bridges across its own borders to keep the Allies out, but left two bridges intact. However one of those bridges collapsed after being used by the Allies for about a month killing about 28 men.

42.) The “Keep calm and carry on” meme originated in WWII  in London during The Blitz.

43.) Nazi Germany had an interrogator, whose methods didn’t involve torture, but instead taking prisoners on nice long stroll through a forest while getting to know them. Sooner or later said prisoner would actually let loose secrets. This interrogators methods were very successful and he still is alive to this very day.

44.) Adolf Hitler is often made fun of on youtube in “Downfall parodies”. Downfall is a german movie where it takes place during the last few days of Nazi Germany where Hitler realizes his Third Reich is losing the war and he has to either admit defeat or kill himself.

46.) German soldiers would some times sing when attacking the enemy in order to intimidate them.

The World Wars: documentary from the History Channel.