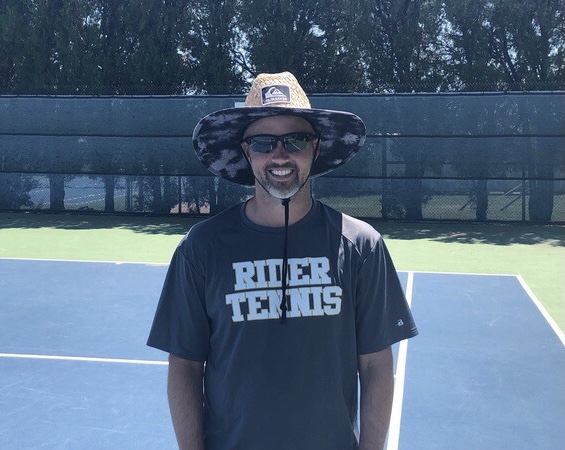 Dale Murdock is entering his first year of coaching tennis at Rider.

Rider has a new head tennis coach this season, and it’s someone familiar to campus. Dale Murdock played tennis with the Raiders in the early 2000s and now replaces Kyle Apperson.

The Rider Chronicle sat down with Murdock to discuss his new role and expectations for the current season.

Q: What are your expectations for the upcoming season?

A: Just trying to get better between each match and for them to enjoy what they’re doing. The unique thing about tennis is that it is an individual sport, so I’m hoping to make a team setting and for the team to enjoy being teammates and to have confidence and play well.

Q: How has your first week been at Rider?

A: I’ve enjoyed it. The first couple of days were interesting with the recent scares, but that was more of a district thing. I’ve enjoyed working with high school kids again. Their humor and personalities are different and I enjoy seeing that side of student-athletes.

Q: Who are some key players to watch out for this season?

A: On the girls’ side, Axelle Jacquemin is a returning state qualifier, and now that she’s a senior I’m expecting her to lead our team of talented girls this year. On the boys’ side, there are three juniors in particular. Chaitanya Reddy, Carsen Watson and Matthew White are really stepping up, especially with us not having senior boys this year. They’re the most experienced and are moving from the middle of the lineup last year to the top of the lineup this year. I’m excited to see how they handle that adjustment for themselves while also leading a group of inexperienced players that we have to count on this year that were not having to play significant roles last year.

Q: Are there any changes you want to make from previous years?

A: I don’t know if there have been any changes or not. I’m not worried too much about what the other coach did or how they handled lineups or things like that. I’m trying to make my own mark and coach how I want to run things and what I think will make the team the most successful and make choices that will benefit the team. Whether it’s similar or different from the previous coach, I wasn’t too worried about it.

Q: Has your new role presented you with any challenges?

A: The main challenge was the timing of it. When I started in the position it was very close to when our season started. It was difficult having to coordinate with Coach Duncan about practice schedules, contacting parents, getting organized, and other logistical things off the court in addition to only having a week of practice and two-a-days right before our season started. It hit the ground running and there wasn’t a lot of adjustment time. The hardest part was just how fast everything happened. As far as managing coaching high school and middle school, so far it’s been alright because middle school’s season hasn’t started.