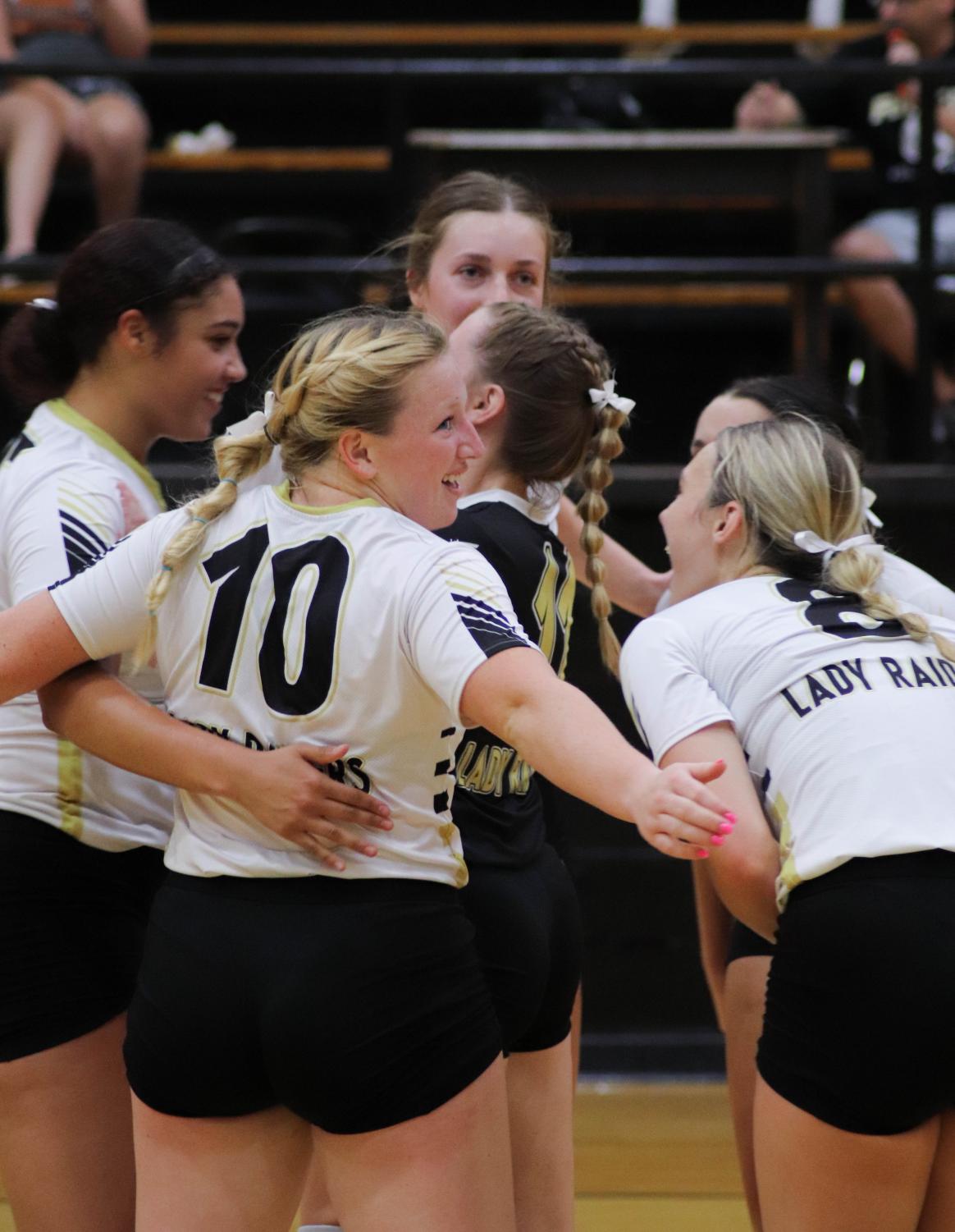 The Lady Raiders celebrate earning a point in a non-district match. (Rene Banda)

The Lady Raiders celebrate earning a point in a non-district match.

After kicking off the district season with a win Friday against Granbury, the Lady Raiders volleyball team is anxious to see what the rest of the season will look like.

This year’s group of girls is more of a family than just a team. According to coach Alysha Humpert, they are genuine friends.

“We’re just a team that loves each other so much, and you can tell on the court with how we play,” senior Lexi Carter said. “We play for each other and that’s really what has pushed us so far I think.”

The team is also anxious for their skill and hard work to pay off again. Last year the Lady Raiders clinched the district title and went three rounds deep in the playoffs.

“We are so excited. We’re so ready to get to the main part of the season,” Cameron Chamberlain said. “We’ve really worked to get first in district and playoffs and stuff like that.”

Each player has their own goal and hope for the year. In the past, the team has always won playoff games, but never gotten past the third round. The team is hopeful that they will be able to go even farther than they previously have.

When asked what her goal for the season is, Addy Self said, “To be a leader, to be hype for the team and just help them win as much as I can.”

Chamberlain’s goal is to “just to push each other as much as possible with district and hopefully make it past that third round of playoffs. We’ve never been able to.”

Other members of the team have broken records. Sadie Portmann claimed the school record for most kills in an August game with 33 kills against Byron Nelson.

When asked how she felt about her accomplishment, Portmann said, ”It means a lot to me because the person who had it before, Meredith Fisher, was someone I truly looked up to. And I put a lot of hard work into it, and it’s nice to see that my hard work paid off finally.”

At least one Lady Raider volleyball player knows where she’ll play next year, too. After graduating, Maegan Lacy will be attending the University of Central Oklahoma, where she will be following in her mother’s footsteps playing volleyball at the next level.

“It’s always been my dream to go to the next level so I’m super excited,” Lacy said. “Especially because my mom has played college volleyball and I always wanted to do the same, following after her, so it means a lot.”

Nine of the team’s 16 players are seniors so there’s a sense of urgency because their playing days together are numbered. The group of close friends is ready for this year’s upcoming challenges and ready to face whatever district and the playoffs may throw at them.