Lady Raiders continue to strengthen as they start play-off run 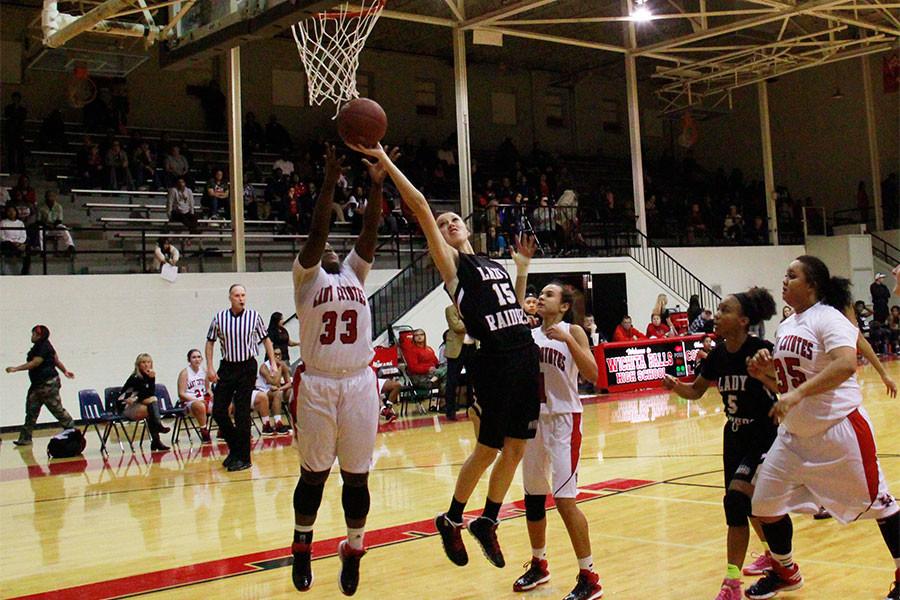 Junior Rachel Richie shoots a lay-up during a game against Old High.

Coaches start with scouting reports, then the shuffling of feet fills the courts as the Lady Raiders start their practice. Eyes follow as a ball is tossed into the air ready to be snatched. The competitive instincts of two girls lands one in the dentist’s office while the other is bandaged for her cut elbow.

It’s game night and the girls gather in prayer.

Time stands still as everyone waits, and the high pitched whistle starts play.This year that play has led to an undefeated district season.

“We want to win state championships,” junior Lady Raider Nicole Linn said. “All it’s going to take is being a team and getting along because when we play together we can’t be beaten.”

The bond between the girls is undeniable, and many of the Lady Raiders have even played with each other since the sixth grade Linn said.

Along with bonding on the courts, the girls hold team dinners every Monday before their game the following night.

“It’s usually when we get together and hang out,” sophomore Lady Raider Jazmin Luster said.

“It’s really fun. The girls are really sweet and hilarious and I love them all. It’s a way to interact with the team.

”For Jazmin Luster, basketball has “always been [her] inspirational, family sport.”

“I’ve always played basketball since I was little,” Luster said. “It means a lot to me. My dad kind of made me start but then I just fell in love with it.”

The bond and history of basketball that these girls share is what the girls say strengthens the Lady Raiders. Basketball is a sport of diversity in which each and every player must uphold their role as well as be prepared to fill another’s; it is a true team effort head coach Ramsey Ghazal said.

“Players have to accept and perform roles in order to win or have success,” Ghazal said. “Basketball is different because those roles are not as easily defined as they are in other sports. You can’t just be a scorer and not play any defense in basketball. You have to do a little bit of everything.”

Together, the team makes that everything happen.

“I could care less about scoring 50 points,” Linn said, “but being a team is really what helps me see other things differently and see how we can work together not just in basketball. Being on the team helps me take what I learn and put it into student council and PALS and other organizations. It kind of helps me be a leader.”

Along with their relationships with basketball, players say that the Lady Raiders’ strength also comes from their attitude and effort.

“We know that we all individually put in work, and you can see it on the courts,” Linn said. “We’ve been working really hard at practices and in games,” Luster said. “Our coaches pushed us a lot to do our best, and we know to work together as a team and not individually.”

Getting to this point was not an easy task for the Lady Raiders. Totaling six hours a week, these ladies practice three times every week for two hours.

“It takes a lot of work to get to this point,” Ghazal said. “Our players are not only talented but work extremely hard to achieve this level of success.”

Throughout the season, the “crowd [has been] a big motivator,” Ghazal said.

“The girls are thrilled when we have a big crowd at the game,” Ghazal said. “It makes them dig deeper to play well for the fans who came to support them.”

Coach Ghazal said that the Lady Raiders are ready for the playoffs that they’ve earned through their competitive season.

“We understand that the season is the journey for the playoffs that are about to start,” Ghazal said. “We have talented players who work really hard to get better [and] we feel prepared.”