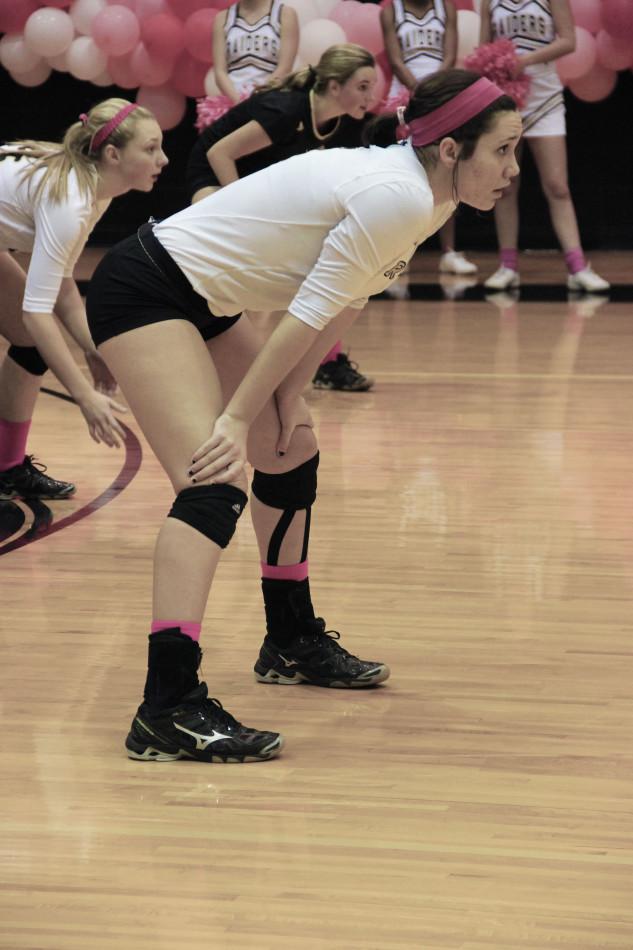 Junior Kendall Chamberlain woke to someone shaking her shoulder.

Her father was standing by her bed, practically bouncing with excitement, trying to shake her awake. In his hand, he held the daily issue of the newspaper.

Wondering what was going on, Chamberlain stretched and rubbed her sleepy eyes. Her father proceeded to shove the newspaper toward her face and excitedly said “Turn to the Sports section.”

Suspiciously, Chamberlain turned to the page and found her name, but not in the way she expected. She looked up to her father in shock. He nodded.

Finally, all the grueling practices and ridiculous workouts had paid off. Finally, all the sacrificed weekends of playing competitive club volleyball tournaments had proven worthwhile. Finally, she had done it.

She made the All-State volleyball team.

For Chamberlain, this means she is among the top 40 volleyball players throughout Texas.

Chamberlain is not the only Rider student bestowed with this award.

“At first, I didn’t really understand it, but Coach Papas explained to me that if Texas made a team to compete, I would be on it,” Mendez said. “It’s a pretty big accomplishment, since there were only three freshman girls out of the total 15 on the All-State girl’s cross country team in Texas.”

The All-State team is something that can propel both Chamberlain and Mendez into their futures, at Rider and beyond.

As a freshman, Mendez says she feels “it gives [her] a bar to cross next year.” Already Mendez has goals for next year’s races saying she would like to be under 19 minutes, even reaching into the high 18 minute mark.

Ultimately, “I feel like I’m actually doing something,” Mendez said.

Chamberlain carries her accomplishment beyond high school, over into her college career, as she said she plans to play competitive college volleyball.

“It’s a really big honor to be part of that team, so it looks really good for college recruitment,” said Chamberlain.

Despite her future plans, Chamberlain acknowledges the present as well. Chamberlain said she holds herself to a higher standard because “when you receive an honor like that, people look up to you.”

Chamberlain is very optimistic about her role in the future of Rider volleyball.

“Next year, we could have more than one All-Stater,” Chamberlain said, because all of the players make an effort to better themselves on the court.

Chamberlain uses her positive attitude to be a role model to her teammates on the court. Because of role models like Chamberlain, Rider has a “team that works hard.”

While Mendez and Chamberlain made the All-State team of their respective sports, seniors Michelle Ingle and Skye Catletti made All-State Academic team for girl’s cross country.

“At first, I really didn’t know it was that big of a deal, but I’m definitely excited about it” said Ingle.

To be part of the All-State Academic team, coaches must submit applicants to the Texas Girls Coaches Association Board, who then approve a select number of students that they decide are the best and most qualified. In February, the selected students, like Ingle and Catletti, go before the board to be recognized and accept the award.

There are several benefits to being part of the All-State Academic team in any sport, but one of the biggest is college scholarships.

“I bet a lot of colleges are looking for kids like me, and I would consider myself a good kid. That will help me out with any college I apply to,” said Ingle. Catletti said she agrees, saying “it looks great on a college résumé.”

However, Ingle said she isn’t going to college for cross country, she is going for an education.

Any sort of accomplishment “will help make my résumé look even better,” said Ingle.

Although an achievement like the All-State Academic Cross Country team eventually helps on subjects like college scholarships, there are also benefits that help recipients in the present.

“The fact that I got it gives me a little confidence boost,” said Ingle.

“You just get recognized and congratulated for working hard and being able to multitask really well,” said Catletti.

Ultimately, to receive awards like All-State or All-State Academic teams, recipients say you must be able to multitask.

“Being able to multitask will definitely help me later in life, so being able to hold good grades while competing in all these sports at the same time, it’s pretty tough. When you’re working your job and raising your kids, itjust helps you manage you time better,” Catletti said.

Athletes say whether they make an All-District team, All-State team, or simply play for fun, it all comes down to a matter of the heart.

Whenever you compete, you have to “work hard and