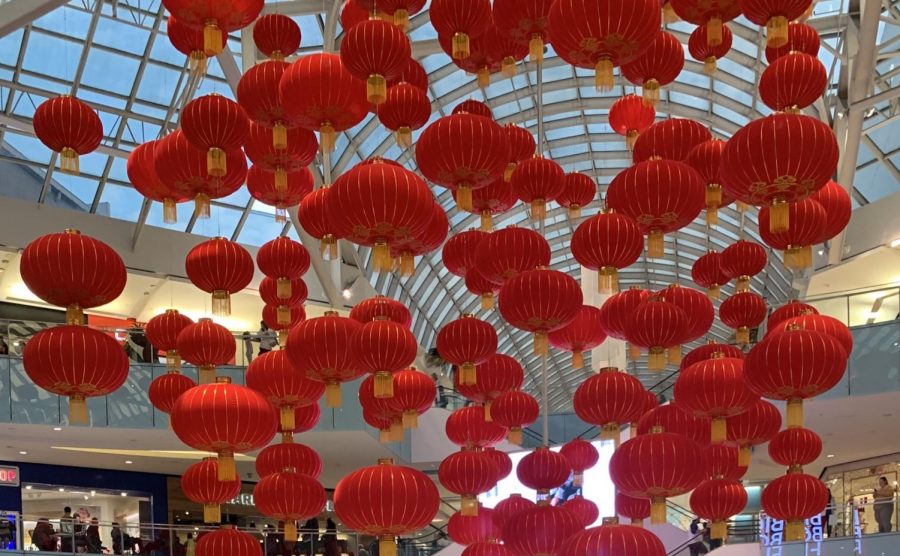 Lanterns hang from the roof of the Dallas Galleria to celebrate Lunar new year, which starts on Jan. 25th.

Glowing lanterns, lunar calendars and red envelopes are currently seen in abundance around Asian households and markets. These popular symbols mark the beginning of a new year in several Asian countries.

Unlike the American new year, Lunar New Year goes by the lunar calender, which is based on the moon and its phases.

The Lunar New Year celebration begins Saturday, and many festivities will go on through the week. Many countries have their own New Year’s clothes such as the qipao or cheongsam and the hanbok, the traditional dresses of China and Korea.

Students with an Asian heritage such as freshman Helen Li still celebrate each new year with different customs.

“We typically make dumplings every year and we get a whole bunch of people together and it’s great,” Li said. “It’s just a really nice bonding activity, especially with all the Chinese members in the community.”

“Dumplings, noodles, any kind of Chinese foods are really my favorite, but dumplings are probably a big staple because it helps you bond when you’re making it with your community and friends.” Li said.

Eating good food isn’t the only thing Li loves about the Lunar New Year, receiving red packets is a also one of her favorites. Red packets, also known as hongbao or lai see in Mandarin and Cantonese, are envelopes of money given to family and friends during the new year festivities.

During most Chinese New Year celebrations, red is predominantly seen in decorations, food and clothing. The color red symbolizes good luck in Asia.

“There’s a myth of this monster called Nian, and he came around until at last the people in the village wore red to scare him off,” Li said.

Folktales and stories take the backstage in modern new years. However, they make up the backbone of the zodiac sign lore. The becoming of the zodiac animals originated from two different stories with the same ending. A powerful figure, the Jade Emperor or Buddha, called on the animals to race across the river. In the end, only 12 finished the race, creating the zodiac signs on the calender.

Each of the zodiac animals correspond with different years. This time marks the year of the rat.