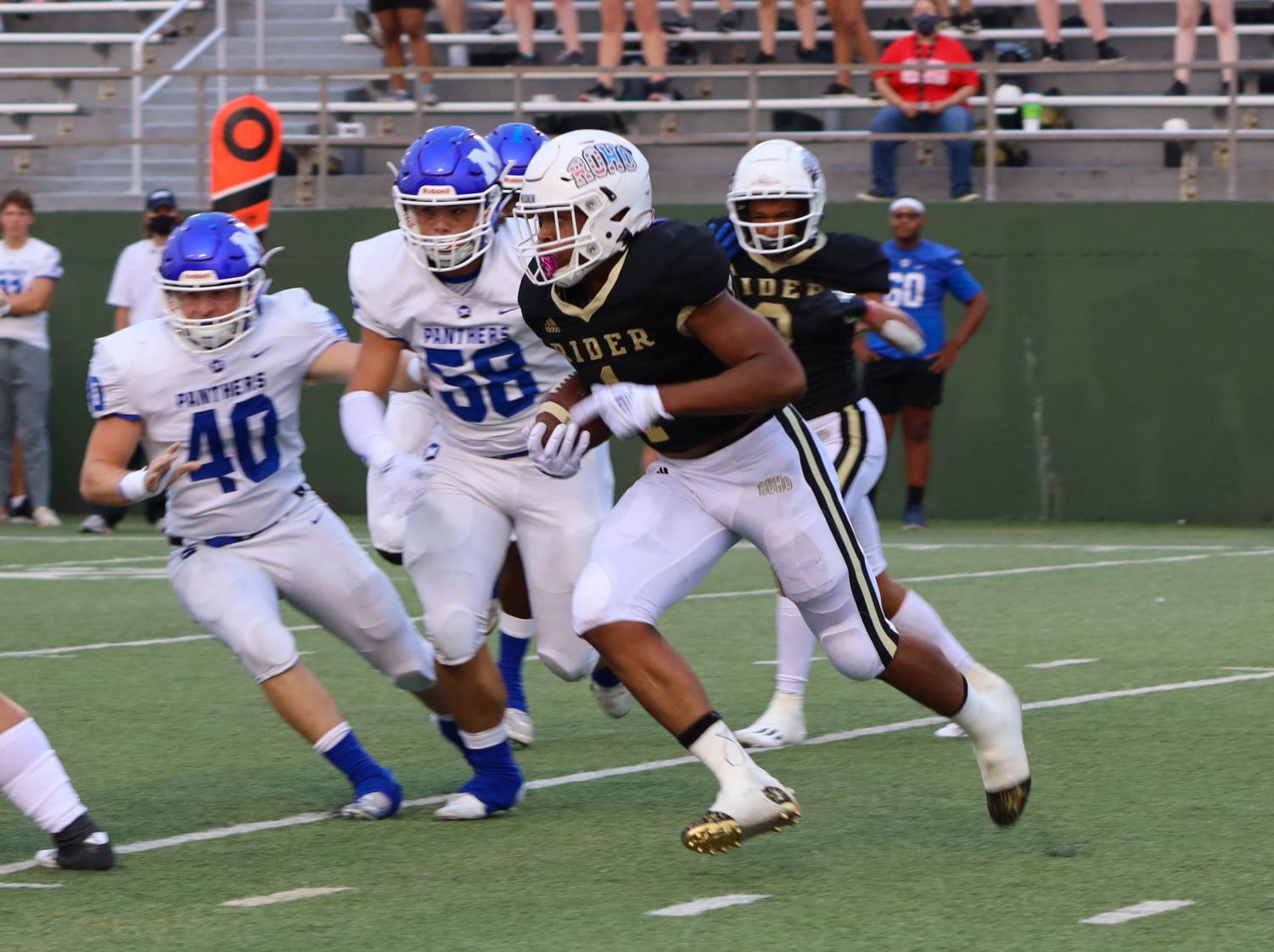 Anquan Willis is off to a strong start in 2021, rushing for eight touchdowns in Rider’s first three games. (Lenia-Sophie Lange/Rider Media )

Anquan Willis is off to a strong start in 2021, rushing for eight touchdowns in Rider’s first three games.

Rushing to the next level

Willis off to strong start for undefeated Raiders

Every football season offers up the chance for players to become stars.

Although he made varsity as a freshman, junior Anquan Willis has come quite far in a short amount of time.

Looking to earn his place as Rider’s next Division I athlete, Willis has already made an impact in 2021 with eight rushing touchdowns and three sacks.

he takes care of the football, he runs harder and he’s faster.”

Willis is not only Rider’s go-to running back, but also a key part of the defense as a pass-rushing end who leads the team in sacks and quarterback pressures.

Starting on varsity as a linebacker, it wasn’t until the end of Willis’s freshman year that he took his place as a defensive end.

“Things came a lot more naturally to him there,” defensive coordinator Ross Dillard said. “There’s a lot less in front of him and it just allows him to go be himself at a higher level. We get more production from him down there and he’s way at home.”

In addition to his defensive expertise, Willis is nearly unstoppable when he has the ball in his hands. His 366 rushing yards are almost 300 more than anyone else on the team.

“He’s very versatile,” Bindel said. “Every now and then, he may bounce a run that we feel like he needs to keep inside. But, the way that he hits the hole, he hits it so hard — that’s just something that you can’t teach.”

Willis is focused on helping Rider get off to a great start. The Raiders, who opened with wins over Dumas, Frisco Independence and Midlothian, look to keep the momentum going Friday at home against Odessa.

“I think my best attributes are my speed and my size,” Willis said. “I know I need to improve my vision on the field and be able to block for my teammates.”

After splitting time with Tre Byrd last year, Bindel and Rider’s football team are leaning on Willis more this year.

“Anquan is really gifted,” Dillard said. “He’s a really fun kid to coach, but he has a skillset that sets him apart from a lot of these other athletes. His size and how quick he gets on the ball and the position he plays — he’s lethal.”

Looking at highlights from prior @raiderfball games this year and I came across this gem by Anquan Willis against Dumas.@Hull_TRN @Sportstalk1230 @dctf pic.twitter.com/EeESHMZIaR

Beyond fancy footwork and memorizing plays, Willis’s sharp mind has set him up for academic opportunities as well.

“I know Rice reached out about Anquan,” Bindel said. “And his grades are not bad at all, his grades are really good. He has a lot of opportunities ahead of him because he’s done well in the classroom.”

Of course, several colleges have already reached out to Willis to express their interest in his talent. However, the young athlete’s plans remain very broad.

“It’s just something I love to do,” Willis said. “I plan to play college football for three years, graduate and get drafted into the NFL.”

But for now, Willis will keep taking it one game at a time.

“My advice for all the guys, including Jacob (Rodriguez) and J.T. (Barrett), is that all these guys who just play at the next level really should focus on being a good teammate,” Bindel said. “And all that other stuff is going to take care of itself.”