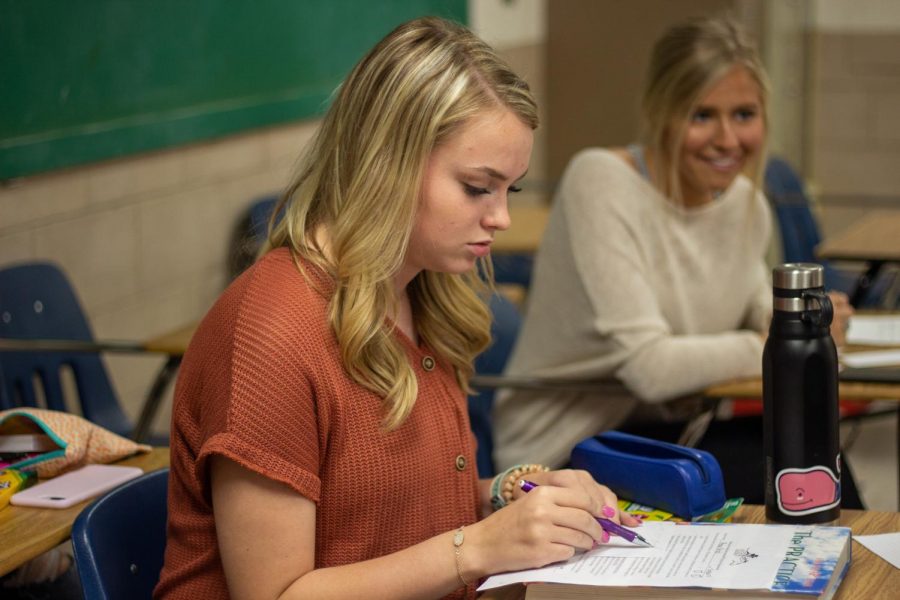 While working on postcards to send to El Paso, many of the students worked together to come up with some ideas.

Marina King knew she wanted to do something to make a difference.

El Paso needed as much support as possible following the Wal-Mart shooting that killed 22 people and left 24 others injured.

One of King’s former students shared a screenshot from a post made by an elementary school teacher asking for other Texas schools to keep the El Paso students in mind. When the Spanish teacher saw this, she felt that a group of students at Rider High School could help to soothe the children’s pain.

“So, I thought ‘Why not?’” King said. “I figured this would be perfect for one of our class periods and it would help a lot of people.”

Peer Assistance and Leadership, or “PALS”, is an organization that participates in community events, charities and other WFISD schools. King teaches this class of upperclassmen, helping them grow character and confidence in helping others.

“I really like helping people,” said PALS co-vice president, Drew Clarke, “And PALS offers lots of ways to do that.”

Inspired by the teacher’s post, King devised a plan for her PALS. Every member would make two colored notecards with encouraging, inspiring or compassionate words for the young students. With 45 students, the grand total came to 90 cards, all of which will hopefully help a child in need of love and support.

The cards were sent out last week with the PALS’s thoughts and prayers for those who were affected by this terrible tragedy.

“I just hope that this will bring them hope,” said PALS president Anna Grisel. “I hope that it will show them that people are still good.”