Behind the Scenes: Lip Sync 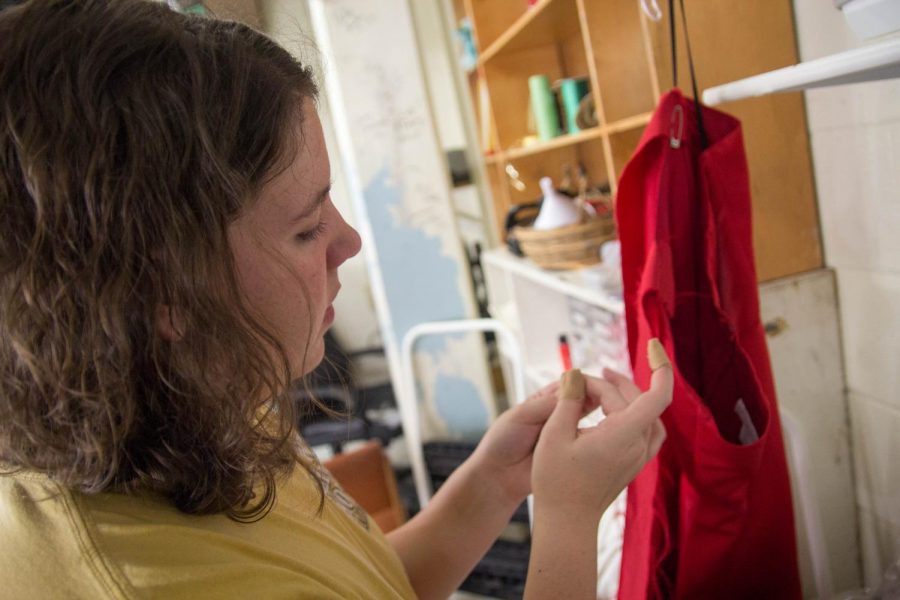 Erin Wisch works on a costume before the performance.

Lip Synch is a much-loved production put on by Rider Theatre every year. It is exactly what it sounds like, the actors dance and lip sync to music according to the show’s theme. In year’s “Hall of Fame” Lip Synch, artists like Michael Jackson and David Bowie live on, on stage at least. With the new theatre teacher, Ms. Cahanin, one may wonder what traditions will remain, but it looks like Lip Synch is here to stay.

With any theatre production there are bound to be bumps in the road, especially in this case where almost everyone was new to their position. Lip Synch is entirely student directed, and all but two were directing for the first time.

“It was different because of Cahanin, but overall the experience was the same and it was as good as it could be, stressful, but the overall ending was amazing,” Junior Jack Pittman said.

Senior Katie McGinn even thinks that all the craziness was a good thing.

“Ms. Cahanin really helped us out and it grew our bond with her.”

Lip Synch gives students their own voice and creative freedom in their songs.

“Every director got to tell their own story,” Katie said, “and this year it seemed like there were stories that were important personally to them so I think that this year had a really good message about life and happiness.”

Jennie Phillips, a sophomore, chose to portray a more controversial subject. Through The All American Rejects’ song Dirty Little Secret she tells the story of  Einar Wegener, one of the first recipients of a sex change surgery in the 1920s when being transgender was practically unheard of.

Being Katie’s last Lip Synch, the experience is bittersweet.

“It brings so many new kids into theatre and that’s what gets people started, so I’m going to miss seeing so many new faces come in and fall in love with theatre.”

This year’s Lip Synch turned out to be a huge success, profiting over $3,000. The money earned goes to fund the theatre expenses throughout the rest of the year. Jack was afraid that this year wouldn’t go as well because he felt they didn’t live up to their expectations. Then opening night came and it was “unbelievable.”

“The energy and all the happiness between all of us and our chemistry on stage and all the way through the last show where we just left everything on stage and we didn’t stop.  I think this year was just extraordinary because we all thought we weren’t going to be as good, but it turned out for the better and we were, I feel, better than last year.”